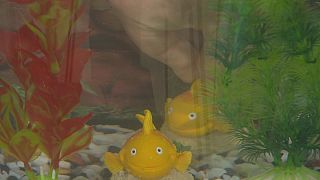 <p>New technology for water purification has been developed based on UV-<span class="caps">LED</span> and photocatalysis. </p> <p>The water purification device is the work of a research program which brought together a group of <span class="caps">SME</span>s (small and medium sized enterprises) and the Cork Institute of Technology. </p> <p>The two main ingredients are titanium dioxide (TiO2) and UV-<span class="caps">LED</span>.</p> <p>Patrick Dunlop, a photocatalysis research scientist at the University of Ulster, explained how the system works: “We load the glass spheres into a little housing. We then use the <span class="caps">LED</span> and we shine UV radiation onto the titanium dioxide coating. The water passes from the fish tank to the reactor, it travels round the spiral over the coated titanium dioxide beads and back through the pump in the fishtank,” he added.</p> <p>UV irradiation is commonly used for water purification as such rays kill many bacteria and viruses. However, the mercury lamps used are not environmentally friendly, as they leave a very large carbon footprint, and are costly to run.</p> <p>Researchers from the Cork Institute of Technology worked on UV-<span class="caps">LED</span>s lamps. Firstly, they needed characterize the UV wavelengths and decide on which ones to use for the process.</p> <p>Researcher at the Centre for Advanced Process and Photonics Analysis at Cork Institute of Technology Liam Lewis described how the group tackled this aspect. </p> <p>“The light comes out of one device, down to the fibre and into at detector,” he said, explaining how the detection equipment works.</p> <p>“From the detector we get an image (which is) displayed on the screen, which tells us about the intensity and distribution of the light that comes from the <span class="caps">LED</span>. We can use that detail and that data to characterize the device. We can use it to operate at an efficient level and that tells us about the inputs we need for different models when we model the reactor itself,” said Lewis.</p> <p>Natalia Rebrova is a computer modelling specialist at the Cork Institute of Technology.</p> <p>“We modulate the intensity of the UV light. We measure the quantity of beams which arrive on the surface to optimize the distance between the UV source and the dish. The speed of the chemical reaction depends on the intensity and spectrum of the UV light. Therefore we can calculate at which speed the water will be purified,” explained Rebrova.</p> <p><span class="caps">LED</span> technology is a growing trend. One of the biggest increases in technology is in the field of UV, according to the Aqua-Pulse project coordinator Niall Bolster.</p> <p>“<span class="caps">LED</span> technology is ramping up at considerable rate. We’re getting more and more requests from people who are currently not using <span class="caps">LED</span> technology but are keeping abreast of the advances to choose a moment in time where they can bring the <span class="caps">LED</span>s into their process and into their application,” said Bolster.</p> <p>Photocatalysis is an effective way of getting rid of low concentrations of pollutants. UV irradiated TiO2 is more powerful than chlorine. When bacteria travels to the surface of the catalyst they are killed by photocatalysis. A reactor would preserve the environmental balance in aquariums. </p> <p>The method might be too expensive for businesses at the moment, according to chemical engineer and <span class="caps">CEO</span> of Advanced Materials Jan Procházka.</p> <p>“The industrial solutions can very efficiently clean high concentrations of pollutants but there is a certain level which is very hard to remove So this is a field where photocatalysis actually is very useful.” </p> <p>“We realised that the big companies are not all that keen on this type of cleaning and this might a little bit too expensive also and most of it is a long term activity,” said Procházka.</p> <p>With this reactor the group might show how larger water purification devices could be useful for big companies.</p> <p><a href="http://www.aqua-pulse.org">http://www.aqua-pulse.org</a></p>