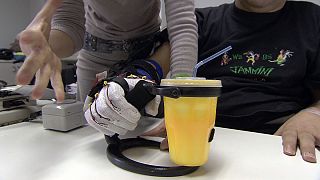 Gradually losing control of your body is something that patients with neurodegenerative diseases must learn to live with. Lorenzo Rossi, an amyotrophic lateral sclerosis patient is coming to terms with his condition.

“Slowly these past five years to six years I’ve lost the ability to use my left arm. And now it’s spreading to the rest of the body. I still can move all of my muscles but I’m getting weaker and weaker.”

Andrea Niutta has multiple sclerosis and has been using a wheelchair for almost twenty years. He attends neuromuscular reeducation therapy at Valduce Hospital in Costa Masnaga near Milan. He has accepted to test a new kind of neuroprosthesis developed by a European research programme in Italy and was surprised by the results. “I was sure that I didn’t have any trouble with my right arm, but I found out I was wrong. Mundus helped to show me how to improve how I am using my right arm through a series of small movements”, he said.

The programme hopes to give back a bit of control, independence and dignity to people like Andrea or Lorenzo. And most importantly, the technology is designed to adapt to the patient and not the other way around.

Franco Molteni, Head of the Valduce Hospital Villa notes the wider importance of the research.

“Mundus has been an important experiment because we were able to analyse patients’ problems in depth. Even though they are considered fringe patients because there’s not millions of them, the solutions for these patients contain elements which will be useful for millions of people.”

The system is composed of a passive exoskeleton to support the weight of the arm and an electric stimulus for patients who don’t have residual muscular activity. The grasp is also controlled via electro stimulation. Different systems can interpret the patient’s intentions, such as muscular activation or a camera focusing on the person’s eye looking at computer screen.

“The electromyographic signal is received via surface electrodes and there is a filtering system of the EMG signal that allows you to check the degree of stimulation given to the arm muscles in real time, so that the stimulation is done in a natural way according to the patient’s intention.”

So far the prototype has only been developed for right-handers. Lorenzo still has some mobility in his right-arm, but not his left. However, as a retired engineer he wants to help develop the next stage.

“The day the prototype will be available for the left arm I will volunteer to do all these experiments again and maybe at that time it will be clearly possible to see the differences between an almost totally paralysed arm and a not almost paralysed arm, or still functioning arms. It might be a good way to make a comparison and help the engineers and the doctors when in the future they will go on with this project.”

Having a drink, combing your hair, or turning on a light. These small but important everyday gestures will be soon within reach for the people who need them.