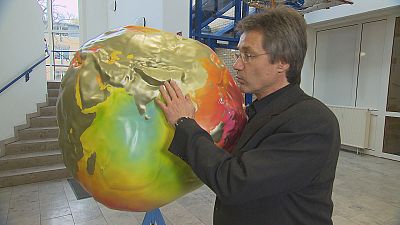 Gravity is one of the fundamental forces of nature, its invisible grip governing our planet – from the rocks inside to the seas on the surface.

In this edition of Space, we begin our adventure in a massive cave in northern Italy, a space beneath the surface of the Earth that is so big it has an effect on the local gravity field. If you parked a car weighing one tonne above this cave, it would weigh five grammes less than elsewhere.

However, getting a grip on gravity on a global scale can only be done from space, and that’s something ESA’s GOCE satellite mission has been doing since 2009. One of the ultimate goals of GOCE is to improve our knowledge of the geoid, a kind of ‘gravity map’ of the planet, that is essential for oceanographers, surveyors, engineers and Earth-science researchers.

Also tracking invaluable information about the Earth’s gravity field is the GRACE mission. While this pair of satellites don’t have the high precision of other missions, they offer something unique: a monthly survey of the gravity field. This US-German mission has been tracking the loss of ice mass over Greenland for the past decade, offering useful evidence for those studying climate change.