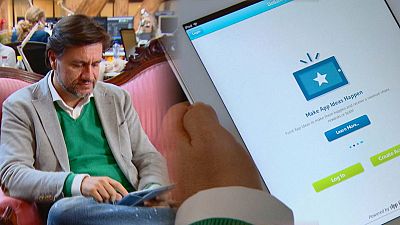 <p>Crowdfunding is a way of financing a business venture: small contributions from dozens, if not hundreds of investors via social networking sites for example. It’s increasingly popular in Europe. Last year nearly 500 million euros were raised this way, twice as much as in 2011. Sellanapp is the very first crowdfunding platform specialising in the field of Smartphone apps. The concept is very simple: you have an idea, you promote it on the platform and if other users like it, they finance it and the company then carries out the development. In a few months, the platform has attracted nearly 300 investors from all over the world.</p> <p>Aernoud Dekker, the founder of Sellanapp said, “Right now, in the age of the internet, it’s easier to find 100 people each pledging 5 euros than one person who’ll give you 500 dollars for an idea.”</p> <p>Four employees in Amsterdam, six developers and designers in France and in Ukraine – this thriving business was itself created thanks to crowdfunding, a system with its own unique advantages. </p> <p>Aernoud Dekker said, “The most interesting aspect of crowdfunding is that you are actually voting with your wallet. Instead of saying I like this idea, or I like this band, or I like this product , you are committing money to it.The second thing is that you spread the investment risk over a lot people.”</p> <p>While getting funding from the banks has become increasingly difficult, crowdfunding has a real advantage: it also gives entrepreneurs easier access to other types of financing, like venture capital or Business Angels. </p> <p>Oliver Gajda, the co-founder of the European Crowdfunding Network said, “For this type of investor, crowdfunding can of course prove that the concept is attractive to other people. Plus it can de-risk the whole investment by bringing other investors on board.”</p> <p>There are around 200 crowdfunding platforms in Europe. Before approaching one, think your idea over carefully, and especially how you’re going to present it. </p> <p>Oliver Gajda said, “You have to be able to sell your idea in your pitch on the crowdfunding platform, which is often restricted to a small video, and some text. This is the key. This is the key.”</p> <p>Aernoud Dekker sums up the key to success: “The key success factors for a successful crowdfunding campaign are: keep it simple. A simple story will reach more people. More media is more money. So open all media channels you can possibly reach. And 3, take the people who pledge on your idea seriously. Because they will be your future ambassadors.”</p>