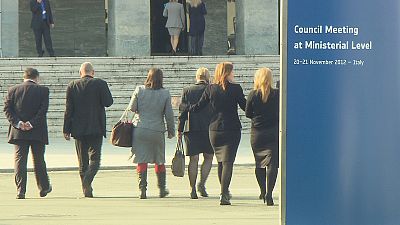 <p>The Italian city of Naples was the dramatic setting for a summit to set Europe’s future in space. From rocket launchers to Mars explorers, everything was under debate – in particular, money. Ministers from the 20 member countries of the European Space Agency, including newcomers Poland, had to decide which projects are funded and how. </p> <p>The bargaining was intense, according to Genviève Fioraso, French Minister for Higher Education and Research: “Tough! Negotiations are never easy. You don’t have much sleep, there are opposing points of view….even if everything is prepared in advance it’s like we’re starting all over again. But you have to just know that, not sleep for two and a half days, and be persuasive,” she commented.</p> <p>One of the key areas of debate concerned the future of Ariane. Late night negotiations led to a compromise, with the updated version of the launcher, known as Ariane 5ME, to go ahead, and be ready for lift off in 2017. At the same time initial studies to build Ariane 6, with a modular, flexible design, would be launched.</p> <p>Some of the most enthusiastic support of space projects came from the British, who are increasing their investment in <span class="caps">ESA</span> by 25%. The UK is targeting telecommunications: “quite simply we think the satellite based delivery of television, or broadband services is a growing market, and we want Britain to be at the cutting edge of it”, explained Minister of State for Universities and Science, David Willetts. </p> <p><a href="http://www.youtube.com/subscription_center?add_user=euronewsknowledge"><img src="https://static.euronews.com/articles/223088/493x225_knowledge-youtube-design_2120x1192_vega_v2.jpg"/></a></p> <p>But what about the science, amongst all this talk of money and market share? <span class="caps">ESA</span> member countries have to fund science, it is non-optional. However the science budget will not budge from its current 508 million euros per year.</p> <p>The European Space Agency left the Naples summit with the cash and political support for a 10.1 billion euro space programme for the coming few years.</p> <p><a href="http://www.euronews.com/2012/11/30/the-uks-newfound-enthusiasm-for-space">Bonus interview: The UK’s newfound enthusiasm for space</a><br /> <a href="http://www.euronews.com/2012/11/30/french-ministers-feedback-on-esa-ministerial">Bonus interview: French minister’s feedback on <span class="caps">ESA</span> ministerial</a><br /> <a href="http://www.euronews.com/2012/11/30/german-space-chief-discusses-dlrs-position-in-esa">Bonus interview: German space chief discusses <span class="caps">DLR</span>’s position in <span class="caps">ESA</span></a></p>