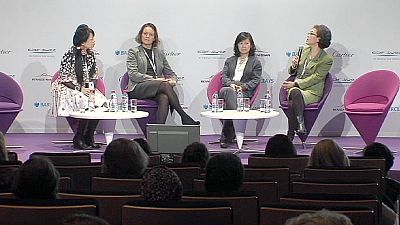 <p>Around a thousand participants from the world of business gathered in Deauville Northern France, for the eighth edition of the Women’s Forum, otherwise known as ‘Davos for women ‘. The hot topic was the pursuit of economic growth, the big question: “what does 2013 hold in store?”</p> <p>“I think we can say with very little doubt that 2013 will certainly be the worst year of the short term since the beginning of the European crisis. It won’t be as bad as in 2008-2009 after the Lehman Brothers bankruptcy, but we will certainly live through a bad year because despite the good intentions of the European Central Bank, in spite of the support that will no doubt be given to Spain in the coming weeks – in any case we must hope so – the budgetary drain that has been ongoing will continue and it will probably reach a peak. 2013 will be the year where everyone feels the pinch,” explains Daniel Cohen, Economist.</p> <p>An example used at the event has been businesses that focus on globalisation to ensure they go on developing new markets even when traditional ones are in crisis. Publicis is the world’s third largest communications group. </p> <p>Jean-Yves Naouri, is the company’s <span class="caps">COO</span>. He talks to euronews about Publicis’ plans to weather the economic storm:</p> <p>“Overall there has been, of course mature markets hit by the crisis, reducing public deficits, debt management, there are a lot of precautionary attitudes from the economic players. Emerging markets that continue to have growth may be doing so at a slightly slower pace but Publicis’ strategy has been to position itself in growth markets, including the interior areas and our mature development in digital has allowed us to respond to these economic slowdowns or reductions of investment a little more solidly than in the past.”</p> <p>Euronews journalist Giovanni Magi interviewed Dominique Reiniche, President of the Europe Group for The Coca Cola Company. He asked whether she thought the economic crisis could aggravate the situation for women in business or be seen as opportunity?”</p> <p>“You know, as we used to say, in Chinese crisis means opportunity. I think yes, there is an opportunity. In reality the first thing, to be honest, is a problem for women because they have more of the part-time jobs, they have also more of the low qualified jobs and so they are more vulnerable in cases of a crisis because they constitute a kind of an “adjustment” variable. This is the negative side, the glass half empty. Now, the glass half full is that everybody should be aware that women are very well suited to a crisis situation, because by nature they lead several lives: of course the professional life, the personal life, the family life, with children and logistics and all that; so, they are, I would say by definition, very flexible, very used to making fast decisions, also very prone to having consensus and balanced decisions with their husband, children etc,” she responded.</p> <p>Some micro-economic examples were presented at the forum and though they seem simple, they could potentially make big changes. </p> <p>Cherie Blair is founder and patron of The Cherie Blair Foundation for Women, she talks about the advantages technology plays in developing female entrepreneurship:</p> <p>“Well, to my mind the mobile phone is the poor person’s computer, because it provides you the hook from which you can access the world. So, for example, take one of the women we helped in Nigeria. She has a small business making traditional toys. She wanted to expand her business. Previously she sold her toys through people she knew in other markets. Using the mobile phone, by sending text messages advertising her toys, she was able to find suppliers, or rather sellers in other markets who would sell her toys, expanding her business.” </p> <p>No one knows how long the crisis will continue, but at least the message from Deauville is that women are determined to confront the crisis with gusto.</p>