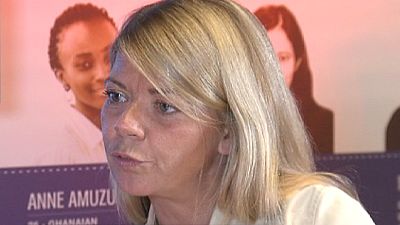 <p>As part of the Women’s Forum in Deauville, one particular section was dedicated to young talent. “Rising Talents” is a growing initiative that focuses on creating a network amongst young career women.</p> <p>Virginie Morgon, Director of Investments at Eurazeo, a French investment company explains:</p> <p>“The project was and still is, to identify young women throughout the world who possess great talents, with character and unconventional approaches that demonstrate a strong desire to overcome boundaries and make things happen in all kinds of professions.”</p> <p>Evelyn Sevin, is Partner at Egon Zehnder International. She talks to euronews about the strengths women have and why the forum is so important:</p> <p>“I think there are a lot of things that come very early, there is a phenomenal acceleration. Openness is important and should be encouraged, this for me is the most important point. The other point is that at the women’s forum, we told ourselves it was our future, we have to listen to the voices of other women. </p> <p>Talking to Chloe Jay – the Managing Director for Van Cleef & Arpels in France – euronews journalist Giovanni Magi asked:</p> <p>“What qualities are necessary for a young woman to have in order to succeed in a professional career?”</p> <p>“You have to listen. Actually in my opinion, what’s important comes throughout her career, finding time to learn and to dedicate time and energy towards excellence. As women we have a little gift and I think it’s special, it’s the gift of empathy, listening to yourself, but also listening to others – I think you can learn a lot and this motivates us to listen. Personally, I was quickly confronted with a rich personal life because I became a “step mother” with a 3 1/2 year old son, I was 27 so I understood what family life could be, with responsibilities, and that never prevented me finding the perfect balance. It’s difficult but it’s perfect because it’s mine. To build my personal life at the same time as my professional life,” she responds.</p> <p>On the subject of politics, Lindiwe Mazibuko – leader of the South African opposition party “Democratic Alliance” – believes women having belief in themselves is key if they are to succeed.</p> <p>“Well, for a young woman in particular, giving how few young women there are in politics, I think confidence is the most important thing because the expectation, I think, of women and particularly young women is that they might be intimidated or unable to speak out and politics is very much about converting people to your ideas, your policies, your plans of action. But in fact I’ve learnt in time that most constituency voters and people who engage in politics respond to authenticity and people who are unusual in politics; because what they want to know, most of all is what brought you into politics, why you felt moved to become a politician, express yourself on ideas, of national importance and the ability to connect to somebody who’s authentically being themselves, even if they are unusual,” she said.</p> <p>Michelle Meyer, Senior US Economist, Bank of America Merrill Lynch agrees:</p> <p>“I think determination. And confidence. I think you have to have a thick skin particularly if you want to succeed in a financial world. As you climb up the ladder there are a lot more men than women, so I think that you have to be determined and you have to be a little bit tough. It is a heavier concentration of men than women but at the same time I think, and particularly in my organisation, there is a focus in encouraging the development of a lot of women. So at the same time I think there’s an ability to have more career advancement if you’re a highly skilled female in an organisation that mostly has men and mostly appeals to men. So, it depends on you, as a person, how comfortable you are working in an environment where you tend to be the minority”. </p> <p>Giovanni Magi then went on to ask artist Yi Zhou about her thoughts on retaining integrity in her chosen field.</p> <p>She explains: “I think that nowadays it is important, in a globalised society, to be able to fight for your own values and to believe in your own ideas and to try to achieve them in the most honest way you can, be true to yourself and to who you are, your country of origin and so whatever your reasons are.”</p> <p>He then asked if there were still divisions between the sexes.</p> <p>“Maybe there was before but now the barriers between men and women are much less important than before. For me to be invited to this conference, also being on your channel shows the fact that there’s more and more room for the work of female artists,” she concludes.</p>