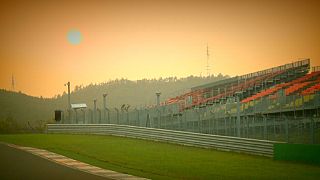 In 2010, the quiet town of Yeongam in South Korea was shaken by the arrival of Formula 1, when the Korea International Circuit that had cost approximately 167 million Euros to build was inaugurated.

The track was designed by Formula 1’s architect, the German Hermann Tilke.

It is the longest straight track in Asia with 5,621 km of semi-permanent track. It is an unusual counter-clockwise circuit, with bends that put drivers to the test.

Korea International Circuit is in a remote fairly rural location just a short distance from the Yellow Sea. At the moment there is a shortage of hotels and facilities to adequately meet the needs of the Formula 1 ‘circus’.

To begin with not every Korean was of the same opinion. In fact some thought this sport could only bring problems. However, three years on and things have changed as there are more and more fans of Formula 1.

Whilst waiting to see a fellow countryman on the starting grid, the Korean people are getting ready for this year’s big event, on the 14th of October. It promises to be, once again, a great show.