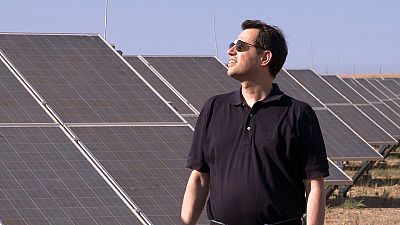 <p>Just north of Athens there is one of the country’s biggest solar energy farms. Monitoring everything is a system installed by a company with Vassilis Nellas at the helm. </p> <p>In 2000, Inaccess was a small company employing 10 people. Now there are 50 staff. Despite the crisis, turnover has doubled over the last two years, and exports are up four times over.</p> <p>The company, which has opened a subsidiary in San Fransisco, is among the first Greek clusters to specialise in micro-electronics.</p> <p>Nellas told euronews: “Through the cluster, we have been given the opportunity to promote and to improve our control and monitoring solutions. We have been given the opportunity to participate in some support actions like patents, <span class="caps">IPR</span> (intellectual property rights) management, marketing, product management and things like that”</p> <p>This cluster in Athens was set up in 2008 by Corallia, a non-profit organisation which had received 40-million euros from the European Regional Development Fund. And initial results show an overall boost in turnover by 270 per cent.</p> <p>The General Director of Corallia, Professor Vassilios Makios said: “Clusters is a very good tool, is a proper tool to fight I woud say misery, to fight, I would say recession. Investors come from outside, from Europe, from Israel, from America. They discuss with our people here. People, I mean from different companies can discuss together, and create a new product. And this unification can bring, I would say, economy of scale.”</p> <p>Two other clusters have been set up recently in Greece – oner specialising in gaming, the other in space technology. In all, more than 130 businesses have been brought together in this way.</p> <p>Prof Makios went on: “This is a wealth. This can unite with a cluster in France, a cluster in Germany, a cluster in Lithuania, and create a big cluster, a bigger cluster, a European cluster in micro electronics which can conquer the world”</p> <p>And Vassilis Nellas added: “For me, the keys to success are : one, try to be innovative, second, find niche markets, and third, definitely, go international.”</p>