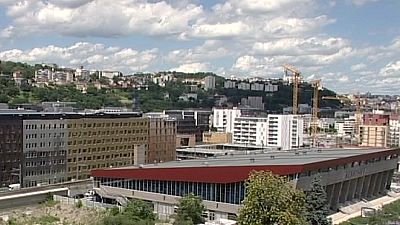 <p>The gentle summer song of road diggers has never been more welcome in Europe! It is music to the ears in these times of economic crisis because it means business as usual. </p> <p>In terms of <span class="caps">GDP</span> the Rhône-Alpes region is the second largest region in France and the seventh largest in Europe. Of course the crisis has affected things there, but you will not hear the bells of doom ringing in that region. </p> <p>In 2013, ‘Four Motors for Europe’ an alliance of Baden-Wurttemberg in Germany, Catalonia in Spain, Lombardie in Italy and the Rhône-Alpes in France will be 25 years old. A quarter of a century of inter-regional cooperation with the aim of developing together and giving a voice to powerful regions as well as less affluent ones. </p> <p>For Baden Wurtemberg, the region which is about to take over the presidency of the alliance, the current priority is boosting the confidence of EU citizens.</p> <p>So, is Europe at the end of the road? Winfried Kretschmann, the Minister and President of the Region of Baden Wurtenberg does not believe that. </p> <p>He told euronews: “No, of course it’s not the end of the road for Europe. But regional authorities are closer to the people and our aim is to translate the big ideas, the big European themes, for people, to get them involved, make them participate, so that they understand the advantages in their daily lives, in their working lives, and in the world of education.”</p> <p>Work is what most Europeans want. Europe’s managers – the national leaders – are all ready with promises but no more. What can regions achieve? In theory the regions should be motors for European public investments, because they receive structural funds from the EU budget. </p> <p>But the sovereign debt crisis has direct effects for everyone with austerity everywhere. However the need for investment in Europe is enormous. </p> <p>Mercedes Bresso, the President of the EU’s Committee of the Regions, said: “I think it’s clear that Europe is behind in terms of big investments, whether that it is high-speed internet, transport, especially rail transport, or what we call the smart grid, for rapid connections for our electrical systems.”</p> <p>How can all these projects be financed when Europe is putting all its effort into saving the banks? Bonds – remember the name – project bonds! Raising money for specific projects. At the last European Council in June, they dared to do it, allocating 10 billion euros to the European Investment Bank, for project bonds. The idea is to lubricate the economic system using the lever of large loans guaranteed by the EU. </p> <p>Mercedes Bresso explained: “It’s also a way of seeing how eurobonds can function. If you think about it, if it works, if investors are interested in it, it means that Europe can still be reliable which means that it can also think about issuing eurobonds.”</p> <p>If Europe can find the means, if it has the political will, what about the regions? Could they take on some investment? The answer is that richest of them could. With an enviable <span class="caps">AAA</span> credit rating, in January this year Rhone-Alpes managed to secure 120 million euros of investment direct from the financial markets. </p> <p>Jean-Jack Queyranne, President of the Rhône-Alpes Region, is very pleased with thats: “Thanks to the financing we get from the markets, we can continue our further education projects, universities, research, laboratories, railway projects. It was indispensable. Otherwise we would have run out of financing.”</p> <p>Pragmatism is key to getting out of the crisis. And perhaps the invention of another Europe? A Europe we haven’t yet imagined. Are you a young Spaniard? A young Italian or French person depressed by unemployment? Perhaps your future could be resolved using the ultra-efficient German method of alternating training and work experience? </p> <p>Peter Kulitz, President of the Congress of the Chamber of Commerce and Industry of Baden Wurtemberg, concluded: “Our system of training, alternating with work-experience is very successful, but in the years ahead we’ll have fewer young people. So my dream is that lots of young French people come to Germany. Not just to work but also to learn and use our training system! We have to cooperate – the French, the Germans – like Airbus which is a great example!”</p>