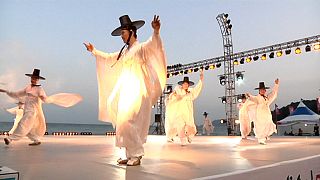 The South Korean city of Busan was alive with music and performance as it hosted the International Dance Festival from June 1st to the 5th.

The event, being held for the 8th time, included 160 dance groups, performing against the stunning backdrop of the ocean and Haeundae beach.

Modern, contemporary, classical, traditional. Each of these styles on show under the slogan ‘Embrace the Ocean’.

Dancers from 14 countries gathered in Busan, one of the world’s top five convention cities, and the second biggest city in South Korea, to share their work and leave a piece of their art in the country.

Organiser Kim Heeeun explained the philosophy behind the event. She told euronews that with the festival taking place in front of the ocean, water was an important element: “Water can break barriers and unite people. It can break through language barriers, the generation gap and ideologies. We can exchange our energies having fun together. This is why the festival focuses on communication and harmony.”

One of those performing was the English contemporary dancer and choreographer Caroline Finn. She presented two pieces, ‘Beside Myself’ and ‘Bernadette’. In the latter, the preparation of a cake is used to symbolise a woman with obsessive compulsive disorder, struggling against chaos.

Finn explained: “The piece is about what happens when you try so hard to do something so exactly and outside forces make it go completely wrong. Whether it is outside forces or the voices in her head, but little interruptions make this simple task become complete chaos.

“I definitely feel that there’s a curiosity for the type of work that I do. It’s maybe different from what people are used to seeing, but you have their attention and they are definitely pulled in and curious to see it.”

Some of Busan’s cultural heritage was also on display with the Dongrae Hak Choum – the dance of cranes. The dancers from the Busan Metropolitan Dance Company are considered some of the finest and most versatile in Korea.

One of the top stars of Korean ballet, Kim Yonggeol, stepped out onto the stage. His piece ‘For Something That’ is a personal quest about the reasons for dancing and the future of his art after the evolution from classic to experimental performances.

During the performance he wears glasses which block out all light. “For 16 minutes I dance with my costume and my glasses and I can’t see a thing. I have to search for my balance and dance. It represents the search for an artist’s path, who retains hope even with a tiny light,” he said.

The festival is an opportunity for exchange not only between dancers and the public, but also between professionals and students. The Samoan choreographer Neil Ieremia led a workshop at the Dong Eui University for want-to-be-dancers. He was also joined by his New Zealand Company ‘Black Grace’.

Ieremia said: “Dance is an international language and I think whatever you do in dance, there are some things that are really important to always try to convey, I think, one of them is to try to have as much fun as you possibly can.

“Here in Korea they are very structured, they are very disciplined, so I’ve tried to teach them a little bit more of a classical sort of edge to the contemporary style.”

The Black Grace company brought an explosive mix of Pacific culture and contemporary dance with a piece on the theme of change, called ‘Amata’.