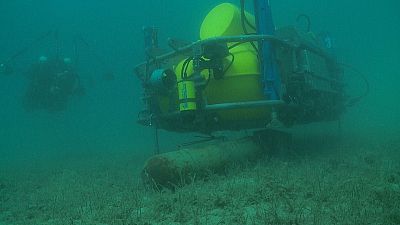 <p>Protecting maritime and land borders is a daily challenge for Europe. Researchers have been examining how to use lasers, gamma rays and neutron beams to address that challenge. </p> <p>This is how some new robots are being peacefully engaged on Europe’s last frontier of border protection. </p> <p>Some very unusual research tools have been arriving in a picturesque port along the Croatian coast. </p> <p>“This is an airplane bomb. And there is a variety of different bombs like this along the coasts of the Mediterranean Sea, the Baltic Sea and the Atlantic Ocean,” explained nuclear physicist Vladivoj Valković. </p> <p>They are in fact fake bombs and present no real risk, even if they contain everything needed to make dynamite. </p> <p>“Hydrogen, carbon, oxygen and nitrogen. <span class="caps">TNT</span> has only these four elements. So it is easy to make a simulated bomb preserving the proportion of these four elements,” said Valković. </p> <p>The dummy bombs are being used to test a submarine able to identify underwater explosives. </p> <p>The prototype has been designed by scientists at a European Union research project aimed at improving security near Europe’s key maritime infrastructures and along sea routes. </p> <p>“If there are reports of an unidentified object lying on the sea floor, or being attached to a bridge or any other maritime infrastructural element, you can send our surveyor. It will approach the object, position itself, do the measurements, report the results to the mother ship and then move away. The results of the inspection will be the identification of the chemical composition of the material inside,” concluded Valković. </p> <p>The prototype is being given a real-life test along the Adriatic coast. </p> <p>The fake bomb is carefully posed on the sandy sea floor, some 10 metres underwater. The robot is placed over it. It then starts emitting neutron beams that will help to see inside the device. </p> <p>“Neutrons are able to penetrate materials and find out what they are made from. They collide with the material inside the bomb, and the collision produces gamma rays. We’ve developed an electronic detector that allows us to collect a concentrated data stream from a high-power neutron bombardment,” explained <span class="caps">UNCOSS</span> project director Guillaume Sannie. </p> <p>Special software transforms these gamma rays into a graphic readout so researchers can determine the type and quantity of elements inside the bomb. </p> <p>Analysing the readout physicist Cyrille Eleon told euronews: “We can see a peak here; that’s the carbon. The second peak indicates the presence of oxygen, and the software tells us the relationship between these two readings. If it reveals a potentially volatile ratio, like here, the system has identified that the object we are examining contains explosives.” </p> <p>After a conclusive first test, the fake bomb is recovered and the submarine is safely towed back for some maintenance. Further tests will help to enhance its underwater mobility and data-acquisition accuracy. </p> <p>Meanwhile in Poland, there is a very different border challenge. </p> <p>Researchers are seeing if they can control the European Union’s land borders with the wheels of an autonomous, unarmed gamekeeper. </p> <p>“The platform drives autonomously to the desired observation point. And the observation system is activated; radars, observation cameras are activated, so they can detect people who are trying to cross the border illegally,” said electronics and systems engineer Jakub Glowka. </p> <p>Once the vehicle identifies any illegal action along the border, it raises the alarm, while at the same time providing its position and video data so appropriate action can be planned by border guards. </p> <p>“The system is able to provide video data, including normal video footage but also infrared video, and data coming from radars. The main challenge that we faced was the integration inside the vehicle of complex elements like the autonomous driving system, autonomous tracking and detection of people and vehicles, and the sophisticated control and communication features of the whole system,” added Glowka. </p> <p>Before going into action, the vehicle is programmed according to the specific weather and environment around the border that it has to survey. </p> <p>“The platform has an obstacle detection system to avoid obstacles it can find on its way. The vehicle is also able to perform ‘path planning’ by itself. So it will not enter forbidden zones, for example, or it will be able to identify roads where it cannot go. Everything is based in data base systems that have been included in the vehicle,” said electrical engineer Alex Feldman. </p> <p>Those database systems include accurate topographic simulations of the environment around. </p> <p>For a series of tests in south-west Poland, 35 different computer-simulated elements were created by the developers. </p> <p>“It includes topographic data and aerial data. For instance, information on surrounding buildings, its heights, water sources, agricultural areas, fences, trees, roads, buildings,” said remote sensing engineer Eija Parmes from Finland’s Technical Research Centre. </p> <p>Topographic simulations, data from embedded cameras and radars, and autonomous navigation systems were then integrated into a single, easy-to-use tracking and control unit under the supervision of Polish and Turkish engineers. </p> <p>“We have created an enormous architecture for this project. This framework allows us to control autonomous systems from one centre. the number isn’t important, we can handle several autonomous systems here,” said electronics engineer Abdullah Inle. </p> <p>Researchers hope the autonomous technology will eventually be able to provide a less risky, more efficient and reliable way to survey challenging land borders.</p> <p>For more information about this story: <br /> <a href="http://www.uncoss-project.org">http://www.uncoss-project.org</a> <br /> <a href="http://www.talos-border.eu">http://www.talos-border.eu</a></p>