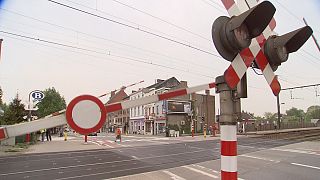 <p>Safety on Europe’s railways is under the spotlight.</p> <p>Just over 3,000 accidents were reported in 2009, with 174 of those were caused by rolling stock in motion. </p> <p>At the same time transport by rail continues to grow. By 2050 freight on Europe’s railways is expected to have increased by 80 percent and the number of passengers by over 50 percent. With that comes an increase in the associated risks.</p> <p>With the aim of improving safety standards, a European research project in Leuven, Belgium, is monitoring trains through an analysis of sound and vibration as they travel. </p> <p>“We install two or three sensors on the rail”, explained Tom Vanhonacker, the Rail System Manager at <span class="caps">APT</span>. “We measure and identify each train and every single wheel on the train that passes on our network, so we know if there is a defect.”</p> <p>The system, based on High Frequency Vibration Monitoring technology, is cheap and takes up very little space. The researchers also say it is highly accurate.</p> <p>Sensors capture the vibrations each time a train passes by. Then a device reads the data which is transmitted it to a central server.</p> <p>By analysing the waves generated by each single wheel of the train, researchers are able to detect mis-shapen or broken wheels.</p> <p>Frederik Vermeulen from <span class="caps">APT</span> detailed how it works: “Day by day we collect all the vibration data. What you will see is that when every train passes you have a peak. We measure the peak acceleration, and if the peak is not normal, we know something strange is happening.”</p> <p>In the Polish capital Warsaw, another European research project is using ultrasound and digital scanning to analyse the physical state of the tramway tracks in the city.</p> <p>New non-invasive inspections make it possible to continually monitor.</p> <p>A high-frequency accelerometer analyses how the metal vibrates, and, without the need to dig anything up, can determine if there are critical points due to corrosion on the bottom of the track. Visual scanners also examine the surface of the rails. </p> <p>Christopher Johnson, a <span class="caps">PHD</span> Researcher at <span class="caps">MMU</span> Rail Vision, explained the equipment: “What we have here is a high-speed wide-scan camera, it’s capable of a light speed of about 36 kilohertz which will give you an acquisition speed of about 40kph. The lighting itself is bespoke and is key for the image analysis; the idea being that you get a very uniform image type.”</p> <p>Integrating digital technology research into railway maintenance cuts costs and increases the reliability of the system. </p> <p>As a consequence, transport services are interrupted less often and we have a much more accurate knowledge of the condition of the rail networks. </p> <p>Nicolas Furio, a coordinator with the PM ‘n’ <span class="caps">IDEA</span> project said the research has come a long way: “Railways are very complex systems. With this project we’ve made significant progress, studying most parts of the various components. What we are aiming for now is an integrated tool so we analyse everything by capturing just one set of data.” </p> <p>They may be very complex systems, but data can be generated on a very small scale, as researchers are doing in Portugal.</p> <p>In Lisbon each train on the line to Cascais is identified and tracked with what is called an RF system.</p> <p>An acoustic sensor on the track captures the noise produced by each single wheel. By measuring that data researchers can tell if the train has any faults or not. </p> <p>Spyridon Kerkyras, Technical Manager of Feldman Enterprise Limited, outlined how it works: “We use acoustic emission transducers, which are attached to the line and when the train is approaching we have a device based on ultrasonics that senses the train is coming and then triggers the data acquisition boards.” </p> <p>This data is uploaded to a central server, and that makes it possible to obtain, at any given moment, a complete picture of each single element of the rolling stock, and also the overall physical state of the trains.</p> <p>“It’s like I have an agent on board each train,” said Innovation Manager with <span class="caps">EMEF</span>, Miguel Areias. “It can help me diagnose any problems. If I have an early warning system for any potential problems that disrupt the circulation of the trains then that is very useful for me because I can take the information into account and build it into my scheduled maintenance plans.” </p> <p>Back in the Belgium city of Antwerp, a consortium that is going to build and run the tramway for the next 30 years has adopted the same system as Leuven</p> <p>For them the advantage of predictive maintenance is significant budget savings, according to Project Engineer Frateur de Pourcq: “Before this system was installed the trains had to come in to be checked visually, every two or three months, to see if there was a problem with the tram or not. With this system you can put an end to human mistakes. If people don’t see a fault it will be picked up by the system, and give a more accurate answer to the problem affecting the tram.”</p> <p>On railway networks scientific research is not going to end here. It is highly probable that technical innovation will lead to more sophisticated early warning systems, leading to a more in-depth knowledge and reducing the cost of improving safety standards. </p> <p>Mayorkinos Papaelias, the Coordinator of the Saferail Project, believes that will be the case: “The systems that we have developed are based on an open architecture, so we can be interfaced with existing systems already available on the rail networks, but the advantage of the technology that we have developed is that it is low cost and requires minimum intervention to install it on the network.” </p> <p>It is likely that in the future, through deeper research, the transport systems of Europe will be much safer than today. </p> <p>More information:</p> <p>www. saferail. net<br /> www. pmnidea. eu</p>