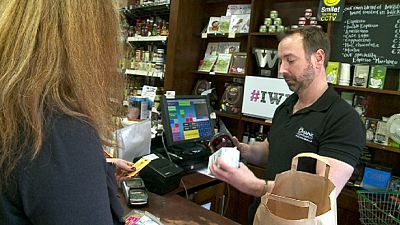 <p>Business Planet has been to Dublin.<br /> The third country after Greece and Portugal to need an international financial bailout, it is forecast Ireland will come out of recession this year.<br /> A major problem for small and medium companies is still access to credit. But euronews met one entrepreneur who found a way around that.</p> <p>The adventure began for Darren Grant in 2008. He had decided to leave behind his senior management job in computing to open a supermarket dealing in 100 per cent organic goods on the main street of Blackrock in Dublin.</p> <p>Even though the recession was taking hold, he believed in his project. He invested all of his savings, but was still short of funds to fit-out his shop, buy his first stock and pay his staff.<br /> So Darren looked at European micro-credit – up to 25,000 euros for new business employing up to 10 people. It is money allocated through intermediaries for the European Investment Fund.</p> <p>“I went to Google and I typed in EU Funding for small businesses and what came up was a website, where I simply clicked into and found out there was funding available for EU businesses, which is great,” Darren told us. “This led me to the Irish microfinance website first step, and I applied to get 25,000 euros, to start the business.”</p> <p>Darren now employs eight people – four of them full-time – to run the shop and his internet site which has become a runaway success.<br /> Last year it turned over 800,000 euros and won various accolades, including the best internet site for a small business in Ireland in 2010 and 2011.</p> <p>“The website was the best investment for the company, and the return we have got ahead of the investment will be maybe 25 times what we have invested,” Darren explained. “It’s fantatstic. It’s won multiple awards. And we’ve competed – a little small shop and a micro-finance startup has competed with major major multi-nationals in this field. We have become leader in the website field.”</p> <p>The site offers 2,000 organic products – soon to become 3,000.<br /> Darren now has a registered trademark all over Europe, and soon hopes to expand his online activity into the UK.</p> <p>“The keys to success are to be able to secure finance for expansion, to be able to keep our website dynamic and innovative, and to expand our products within Europe,” he said.</p>