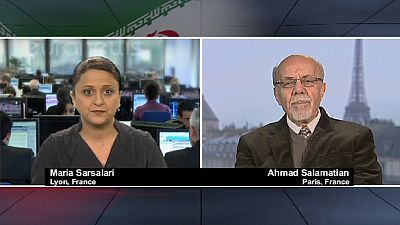 <p>The 9th elections of Iran’s post-revolution parliament are steeped in controversy, reflecting the deep political divisions within the country. The ballot is being boycotted by much of the opposition, but even if it was not, analysts say, many candidates would have been ruled out in the vetting process. For an insight into the vote euronews’ Maria Sarsalari spoke to Iranian affairs analyst Ahmad Salamatian. </p> <p>euronews: Mr Salamatian this is, in fact, an election among the competing groups of the ruling system. How would you portray it?</p> <p>Salamatian: Since a long time before the elections, several officials in the Islamic Republic, and the leader himself, have pointed out that they view these elections as a security challenge. In line with this view, the role of military and security agencies — the latter coming from units of the Revolutionary Guards — has increased. Therefore, it can be said that in these elections, while the regime still maintains its fragmented nature, the main power struggle is among the security and military forces who are engineering these elections, and they will naturally be given a bigger share of the results. Consequently, we can say that the future parliament will be, more than ever before, a parliament derived from security agencies or political factions whose closeness to the Islamic Revolution Guards Corps (<span class="caps">IRGC</span>) dominates all other aspects, including religious and ideological matters.</p> <p>euronews: The Iranian parliamentary system has gone through a lot of upheaval since the day the house of representatives was founded more than a century ago. In this context, how do you assess the upcoming elections? </p> <p>Salamatian: The House’s powers have been progressively reduced to the extent that Mr. Ahmadinejad felt he could defy Ayatollah Khomeini’s famous statement and say that the House is not above everything anymore —Ayatollah Khomeini had a famous saying “the House stands above all affairs”— But experience has shown that the more the military-security agencies prevail, even if only at the initial stage of forming the parliament, it has shown in practice that these parliaments are having more problems.</p> <p>In my opinion, the future parliament will not use its symbolic powers, but the tools it uses and its behaviour will be more of a military and security nature than political. Therefore, in future months, we can say that this parliament will turn into the stage for a power struggle amongst influential security and military-backed factions within the Islamic Republic.</p> <p>euronews: Regarding the current tension between Iran and the West over Iran’s nuclear programme, will the election results bring any changes in Iran’s foreign policy?</p> <p>Salamatian: Unfortunately, whenever the military and security organs are entrusted with making decisions during international crises and their views are given preference, tension has always increased as a result. For the same reason, there will be less potential in the future parliament for working on decreasing international crises. This will create a more complicated and dangerous situation regarding all the existing threats against Iran. Evidently, a military and security-orientated parliament will not have the political vision needed for solving international crises through dialogue, and this will, in fact, escalate these problems and the crisis affecting Iran and the region.</p>