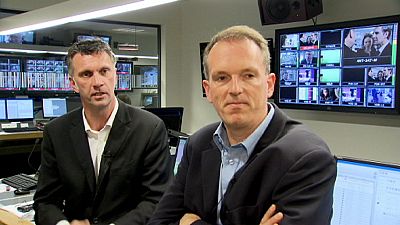 <p>Belgium, Europe’s sixth largest economy, has officially gone into recession, but Belgian small and medium sized companies (<span class="caps">SME</span>s) and entrepreneurs are fighting back. Businesses are still being developed from scratch and unemployment is, at seven percent, more than three times lower than in Spain.</p> <p>Five years ago Michel Loiseau and Bruno Thieffry took over Video Promotion, a small Belgian company specialised in fitting out and equipping television studios, after its owner retired. Despite the economic crisis, they have raised their turnover by 15 percent.</p> <p>“You have to weather a crisis. We recently built a small production studio for just 50,000 euros, which in our profession is really peanuts. They came to us and said ‘This is our budget, will you do it or not?’ There are opportunities, even in a crisis,” says Michel.</p> <p>But to get their dream up and running Bruno and Michel needed to find 300,000 euros. Two of Belgium’s biggest banks turned them away, as they could not provide enough guarantees.</p> <p>“Luckily we came across one of the EU funds, represented in Belgium by the Brussels Guarantee Fund and the Investment Fund. They took a look at our numbers and past performance, believed in us, and took the plunge,” says Bruno.</p> <p><div style="width:280px; float:left; padding:8px;"> <div style="border-top: #333 3px double; border-bottom: #333 3px double; font-size:12px;"> <h3 style="padding-top:5px;margin-bottom:0px;">Access to finance: </h3><br /> <ul></p> <li>The EU makes it easier for <span class="caps">SME</span>s to get financing through national financing establishments</li> <li>The EU provides different financing tools: loan guarantees/micro-credits and/or capital risk investments</li> <li><span class="caps">SME</span>s wishing to receive EU financing should contact funds or establishments that have signed agreements with the European Investment Fund (<span class="caps">EIF</span>)</li> </ul> </div> </div> <p>Their first big contract came when they refitted the control rooms for state broadcaster <span class="caps">RTBF</span>, where their small-business attitude was appreciated.</p> <p>“We had the impression they were part of our team. It was surprising. Maybe that’s an <span class="caps">SME</span> thing, certainly the big subcontractors are more formal,” says <span class="caps">RTBF</span>’s Networks and Playout Director Pascal Bodenghein.</p> <p>The duo met 15 years ago when picking their children up from school. Their success comes from that closeness.</p> <p>“Bruno’s a lot more analytical whereas I’m instinctive. So we have two ways of looking at things; his way is better with bankers, and maybe I’m better off facing the client. Sometimes we switch, which can be nice.” Michel agrees: “Sometimes we do it just for fun.”</p> <p>It is not all jolly japes however, as running a business never stops. The duo already has video-on-demand and internet-connected TV projects on the go.</p> <p>“When there are technology shows in Las Vegas or Amsterdam, we go to meet our clients. But above all, we go to see the new trends, and winkle out the technologies and products that will make money for us tomorrow,” says Bruno and Michel’s Project Manager Emmanuel Charlet.</p> <p>In the last five years the company has gone from eight to 14 employees, and a new office has just opened in Paris.</p>