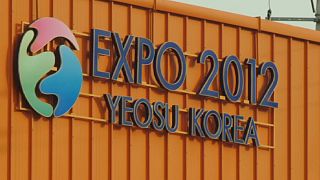 <p>The South Korean coastal city of Yeosu is the venue for the next World Expo between May and August of 2012. Under construction is a modern village of pavilions and hi-tech attractions. <br />  <br /> “Some 4,000 workers are transforming the expo site, which covers almost three square kilometres, and officials say the construction work is right on schedule,” said euronews correspondent Seamus Kearney. <br />  <br /> The pressure is on to meet the high standard of previous world expos.  <br />  <br /> The equivalent of 1.4 billion euros is being spent, including investment from the private sector. Authorities insist it is money well spent, and it will generate billions more.<br />  <br /> And while Canada said it could not afford to attend, organisers say they are happy with the numbers who have signed up. <br />  <br /> Lee Joon-hee, the Commissioner of <span class="caps">EXPO</span> 2012 Yeosu Korea, told euronews: “Despite a widespread economic downturn in the world, many countries have shown their interest in the Yeosu expo. As of now, 106 countries and nine international organisations have confirmed their participation in the Yeosu expo.” <br />  <br /> Computer animation provides a glimpse of how the site is expected to look. The theme is the living ocean and coast.<br />  <br /> And one star attraction in the sea is called the Big-O, featuring light, laser, water and multi-media shows. <br />  <br /> Nam Jae Heon, the head of the Big-O project, explained: “Each effect has their own system, so these systems should be combined and controlled in the control room. This design is also very difficult, and the combination (of the systems) and (having) no errors is very important.” <br />  <br /> Wyatt Defreitas from <span class="caps">WET</span> Design said: “The living screen is very unique. I don’t think anyone has seen anything like it anywhere in the world. This is the first time we’ve actually presented it, and it will be a really wonderful blend, creating artistry. It will be mixed with the technology to create something bigger than the (individual) parts, really a wonderful experience.”<br />  <br /> Individual countries have already begun to work on their pavilions. One of them, the US, says it wants to focus on what it calls diversity, wonder and solutions. It says participation was very important.<br />  <br /> Andrew Snowhite, the <span class="caps">CEO</span> of the <span class="caps">USA</span> Pavilion, told euronews: “The US and the Republic of Korea are such strong allies. And also, the oceans and coast are of such critical importance worldwide right now, and being able to interact with millions of people and to tell our story is really an amazing opportunity.” <br />  <br /> <strong><span class="caps">EXPO</span> 2012 Yeosu Korea</strong></p> <ul> <li>The event runs for 93 days from May 12 to August 12</li> <li>The theme is ‘The Living Ocean and Coast’</li> <li>The expo site covers 2.7 square kilometres</li> <li>Eight million people are expected to visit</li> <li>106 countries have so far confirmed their participation</li> <li>Nine international organisations are also taking part</li> <li>1.4 billion euros is being spent on creating the expo</li> <li>Officials hope billions more will be generated</li> <li>Yeosu is a city with a population of 300,000</li> <li>There are 360 islands off the coast of Yeosu</li> <li>The area is home to two national marine parks</li> <li>The expo mascots, Yeony and Suny, represent plankton</li> </ul> <p>Euronews’ Seamus Kearney said: “With spectacular displays and events, the expo is expecting at least eight million visitors, including more than half a million from overseas.”<br />  <br /> Yeosu is gearing up for the influx and the government has allocated billions of euros to improve infrastructure. <br />  <br /> And even after the expo the site will be used to build up local tourism and give a boost to the population of nearly 300,000. <br />  <br /> New hotels are going up, and even local temples are offering accommodation, in a city keen to promote itself as a popular marine resort.<br />  <br /> Yang Sun Nam, a Yeosu City guide, told euronews: “At the time of the Goryeo dynasty the king came here and chose a name for it. ‘Yeo’ signifies beautiful and ‘su’ means water.” <br />  <br /> With more than 360 islands and precious marine life, Yeosu is the ideal place for debate about man’s interaction with the sea. The region has also had to grapple with how big industry and nature can coexist. <br />  <br /> Kim Byeong-Ho, Director of the Yeosu Community Research Institute, said: “Yeosu is making efforts to protect the environment – such as the islands, the coast and the people who make a living from the sea – by emphasising the value of nature.” <br />  <br /> And there is no chance of a lack of inspiration at the expo, with locals describing their region as the perfect gateway to the marvels of the sea.</p>