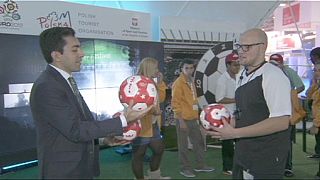 <p>The sluggish world economy means a harsh climate for tourism. This week’s edition of Focus asks whether major sporting events can help resuscitate the industry? </p> <p>London is preparing for the 2012 Olympic games, with the biggest tourism marketing campaign in its history. According to the government, 50,000 to 60,000 new jobs will be created as a result of the games and three billion euros of extra visitor spending is expected. </p> <p>Jeremy Hunt, the Secretary of State for Culture, has high hopes for next years Olympic Games.</p> <p>Hunt told euronews: “London is one of the greatest cultural cities in the world. It’s one of the greatest sporting cities in the world. Next year it’s where it’s all going to be happening. Don’t just watch it on TV, come and experience it yourself.” </p> <p>London & Partners is the official promotional organisation for the city, and its main message is that London is the place to visit, study and do business. According to the company, London attracts 26 million visitors per year and the industry employs more than 250,000 people.</p> <p>Martine Ainsworth-Wells of London & Partners explained: “There’s many, many benefits for us hosting the Olympic and Paralympic Games. Obviously, there is the increase in tourism that we expect after the Olympic Games, but also the regeneration of the east end of London. So, the Olympic site is completely regenerated land, there’ll be a legacy left after the Olympic games, so the Olympic Stadium, the Velodrome, the Acquatic Centre will all be venues that could be reused again. It’s all about investment and regeneration of London which will be long term.”</p> <p>Next year will not only be a great sporting time for London with the Olympics, but also for Poland with the European Football Championship, and for Texas with the glitz and glamour of Formula 1. </p> <p>Indeed Texas is one of the top states in the US in tourism terms. It attracted around 44 billion euros of travel spending in 2010 alone. </p> <p>Julie Chase, the director of Texas Tourism, said: “We’re very excited about Formula 1 coming and starting in 2012, carrying through for a 10-year run, into Austin, Texas. The track is currently being developed and will be a multi-use track. So other activities can occur during the off-season of the race. This is bound to bring substantial travel dollars into the state. Not just into Austin, but the surrounding areas, to San Antonio, even up to Dallas and Houston. We anticipate that we will see substantial benefit from these races.”</p> <p>Poland will be co-hosting the European Football Championship in 2012 and wants to use the opportunity to highlight the country’s tourism potential. </p> <p>Adam Zaborowski of the Polish Tourist Organisation explained: “Large sporting events focus attention on the host country. It is expected that about a million tourists will come to Poland during Euro 2012.”</p> <p>Billions of euros are also being spent on preparing Qatar for the 2022 Football World Cup, with up to 15 billion euros being injected into the tourism and entertainment industries over the next 10 years. </p> <p>Ahmed Abdullah M al-Nuaimi of the Qatar Tourism Authority believes Qatar can become a leading sports venue: “Qatar is becoming a venue for sports right now. Qatar is going and bidding for huge events; already we have the 2022 World Cup. We’re bidding for 2020 Olympics and also we’re bidding for the World Athletic Tournament for 2017. We will create Qatar as a venue, a sport venue, for all the big sport tournaments and events that are happening in the world.”</p> <p>Contact the reporter of this story at ali.sheikholeslami@euronews.net</p>