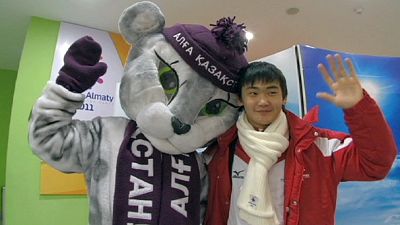 <p>Just 10 years ago, the area around Astana was a bleak and inhospitable landscape. But now a modern metropolis has sprung up. This is no concrete jungle, but a city with up-to-date infrastructure and clear ambitions.</p> <p>Astana is hosting the Asian Winter Games and hopes this is a sign of even better things to come. This is the first time Central Asia has run an event on this scale. </p> <p>The scale and opulence of the opening ceremony showcased the attractions of the region as a whole. The message to the Asian Olympic Committee was that this part of the world has a lot to offer.</p> <p>Temirkhan Dosmukhanbetov is the Kazakh Minister of Tourism and Sports. “This will help to support sport in Kazakhstan, and hopefully it will encourage more people to get involved. Parallel to that, our sporting prowess should improve in step with the facilities. They will be here for many years to come and are particularly valuable because of the new technology used,” he said. </p> <p>But the ambitious building plan in Astana and Almaty has also been undertaken with a more long-term goal in mind – the Winter Olympics of 2022. Kazakhstan plans to bid for the right to host the event, and hopes the extensive development of the country’s sporting infrastructure will help its cause.</p> <p>Jacques Rogge, the President of the International Olympic Committee, seemed impressed. He said: “The Asian Winter Olympics have been very well organised here. The sporting infrastructure is excellent with fantastic stadia, a very experienced organising committee and the hospitable Kazakh people. We are really happy with how it has gone and this certainly augurs well for the bid to host the 2022 Games. There needs to be some more building work done beforehand, but there is plenty of time if the bid is successful.”</p> <p>One hundred torch bearers took part in the traditional relay, which traversed the country from Almaty to Astana. Timur Kulibayev, the President of the Kazakh Boxing Federation, commented: “The flame of the Asian Games has gone through all the cities of Kazakhstan, a huge number of people across the country have seen it.”</p> <p>Japan, China and South Korea – the three recognized giants of Asia – sent their best athletes to the Games.</p> <p>But Kazakhstan itself rocked the established trio to its very foundation. From day one of the tournament, the host nation took the lead in the overall team ranking.</p> <p>Several long-standing ice-skating records were shattered in the newly-built Olympic rink. It is a state-of-the-art facility and local officials are clearly proud. “This proves that we can stage various world cups and world championships in speed skating. The city’s infrastructure and sports facilities are ready,” proclaimed Vasiliy Krylov, the Deputy Mayor of Astana. </p> <p>A total of 1,100 competitors from 27 countries gathered for these Games and 69 sets of medals were up for grabs in 11 different sporting disciplines.</p> <p>Hockey players from Malaysia were reminded of the Olympic ideal of “it is not the winning, it is the taking part that counts” when they lost by two to 23 points against Kyrgyzstan, itself not a leader in the sport.</p> <p>“It turned out that lots of people wanted to come to the Games. We did not expect there to be such an interest. We have done everything we can to create a real holiday atmosphere,” said Timur Yedenbayev from the Asian Winter Games organising committee.</p>