The war in Ukraine, which passed its 100 day anniversary Friday, is now one of the bloodiest conflicts to shake Europe in decades. Thousands have died, millions are displaced and whole cities lie in ruins.

With the rhetoric hardening on both sides, Ukrainian fighters on the ground battled Russian forces in the country's east on Saturday, particularly in the key eastern city of Severodonetsk which saw fierce fighting.

Euronews could not independently verify this.

That's the end of our live blog for today.

A few hundred pro-Ukrainian demonstrators are rallying in the UK capital Saturday, as thousands line streets to celebrate the Queen's Platinum Jubilee.

Russia's Defence Ministry has claimed Ukrainian armed forces are retreating from the key eastern city of Severodonetsk, after suffering critical losses of up to 90 per cent.

In a Saturday Telegram post, the Russian MoD said Ukrainian forces were retreating towards Lysychansk, a city on the other side of the Siverskyi Donets river.

Severodonetsk is a key focus of the Russian war effort at present. It is one of only two cities in the prized Donbas region that it does not control.

Ukrainian foreign minister, Dmytro Kuleba, has rebuked a warning by Macron not to "humiliate" Russia, so that a diplomatic solution to the Ukraine war may be reached.

The French President offered to mediate the conflict and warned against embarrassing Moscow in an interview on Saturday.

Such calls “could only humiliate France and every other country that calls for it," said Kuleba in response to Macron's comments.

"It is Russia that humiliates itself," he added. "We all better focus on how to put Russia in its place. This will bring peace and save lives."

A famous wooden monastery in eastern Ukraine, known as the Sviatohirsk Lavra, has caught on fire, as fighting rages in the area.

A Ukrainian government tweet shows the old Orthodox monastery in one piece, accompanying a photo of it ablaze.

"As a result of hostilities, a large-scale fire broke out on the territory of the All Saints Hermitage of the Holy Dormition Sviatohirsk Lavra," the Ukrainian Orthodox Church says on its website. "The flames engulfed the main shrine of the monastery."

The monastery is affiliated with the Moscow Patriarchate, which is run by Patriarch Kirill, an ally of President Vladimir Putin and supporter of the Russian military.

The Ukrainian government tweet alleges that Russian forces killed four monks there on 30 May. Euronews cannot independently verify this claim.

Russia's Defense Ministry has alleged that Ukrainian nationalists set fire to the monastery as they retreated from Svyatogorsk, reports the state-affiliated TASS news agency. Again this cannot be verfied

A Ukrainian army officer, Yurii Kochevenko, posted a photo of the burning monastery on Facebook, with the caption: "Another crime of Russian barbarians for whom there is nothing sacred."

The monastery stands on cliffs by the Siverskyi Donets river. Russian troops have tried repeatedly to cross the river, aiming to encircle the Ukrainian army. Sviatohirsk lies just north of Slovyansk, a city held by the Ukrainians.

The monastery dates back centuries and was closed by the Communists in the last century, but was reopened in 1992 after the Soviet Union’s collapse.

Ukraine minister: Azov fighters 'will end up here in Kyiv'

The Ukrainian Interior Minister has said Ukraine is "doing everything it can" to bring soldiers of the Azov regiment, who were taken captive when the southern city of Mariupol fell, back home.

"We all know that they will end up here, in Kyiv, and we are doing everything to make it happen," said Interior Minister Denys Monastyrskyy Saturday on Telegram.

Ukrainian intelligence agents are communicating with Azov regiment servicemen, who withstood a gruelling Russian siege at the city's steel works for several weeks, before being captured.

"It is through them that we learn more about their living conditions, food, and possibilities for their release," Monastyrskyy added in the post.

A huge question mark has hung over the heads of the Ukrainian fighters.

After the sprawling Avoz Steel plant was captured by Russian forces, they were taken to territory controlled by Moscow-backed separatists in Ukraine.

Ukraine has called for a prisoner swap but some in Russia - including the deputy foreign minister - have said they should be put on trial.

Read more about how the wives and partners of the Avoz fighters fared during the siege below.

Azov wives: 'This is not a reality show. The truth is horrible' 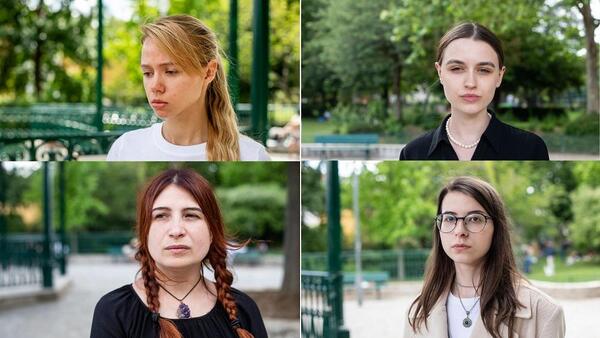 'Our forces are pushing them back' in Severodonetsk, says Ukrainian regional governor

The governor of the Lugansk region, Sergiï Gaïdaï, has said Ukrainian forces are repelling Russia's army in the strategic Severodonetsk city in a Saturday interview.

"Initial information indicates that they have succeeded in taking control of most of the city. But our forces are pushing them back now," he said.

Gaïdaï continued that Russia had engaged all of its available forces in the struggle over the key city in the prized eastern Ukrainian Donbas region.

"The situation in the whole region is extremely difficult. The fighting is currently concentrated in Severodonetsk because, from what we have been able to understand, the Russian army has thrown all its weight and reserves" into this battle, said the governor.

Moscow is currently concentrating all of its forces in the Donbas region in a bid to secure Severodonetsk, one of the last unoccupied cities in the region.

Capturing the city would allow Russia to secure its hold on the Donbas, a industrial region partially occupied by pro-Russian separatists since 2014.