The Catalan crisis has sent shockwaves through Spain and Europe, with the stakes high for the country and the continent. But what is driving the key players on each side of the independence tug-of-war?

‘Insiders’ got a unique insight into the turbulent events surrounding the October 1 referendum, deemed illegal by Spain’s Constitutional Court, in which Catalan voters backed a breakaway from Madrid.

Day One: The Day Before

He began filming the day before the banned ballot, in Catalonia’s regional capital, Barcelona.

September 30 was not like any other Saturday, with tension high as the hours ticked down to polling.

Despite Madrid’s efforts to block the referendum, the pro-independence parties governing Catalonia were pressing ahead with preparations anyway.

Separatists were setting up polling stations in schools. Families were invited to sleep over, thereby protecting hidden ballot boxes against police intervention.

“We are here because we want to exercise our right to vote,” she said.

“We believe this place should be open tomorrow so we are making sure that, with all these activities we are organising here, it will be available tomorrow for people to vote.”

A few years ago, just a small minority of Catalans wanted to break away from Spain. But today, the situation has changed. Separatism has gained momentum, taking on board hundreds of thousands of ordinary people like Thais.

Hans asked why she decided to join the independence fight.

“There were plenty of reasons,” she explained.

“But probably the most decisive was in 2010, not just for me personally, but also for many other people, when Catalonia’s then statute of autonomy was abolished by the Spanish Constitutional Court.

“A lot of people got sick and tired of all of this, including myself and many of my friends. So we thought that right now is the time to start changing things for real.”

Catalan society is split. Those in favour of staying with Spain are often called “the silent majority”. There are many of them, but they are less visible. On the day before the referendum, however, this “silent majority” decided to speak out.

Two years ago, Llibert Senderos formed “Grassroots Spaniards”, with the challenge of building the argument against separatism. But with the independence referendum imminent, Llibert and his friends were quite nervous.

We met them in a Barcelona pub where they were preparing for a unity march. The European flag was highly visible, sending a strong signal.

“We are sure that Catalonia will not remain in Europe if it is separated from Spain,” explained Llibert, co-founder of the ‘Espanoles De A Pie’ group.

“Maybe it could go again into Europe after some years. But they will be hard years for Catalonia.”

Up until now, Catalans for and against independence have lived side by side, accepting their cross-community links and proudly making jokes together, rather than insulting each other.

But will this peaceful co-existence survive growing tensions?

That was certainly Llibert’s fear.

“They try to say to us that we are not democrats – and this is the problem,” he said. 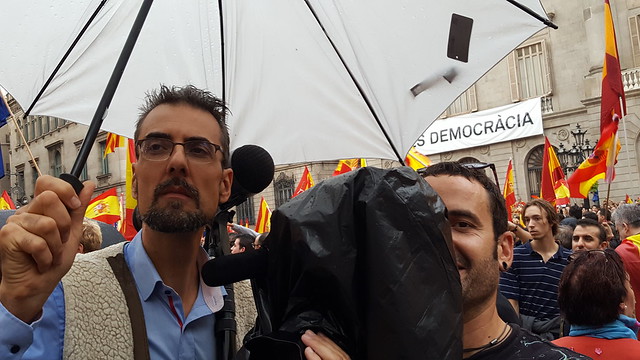 At nightfall, we went back to Thais’ school. Where were the ballot boxes, we asked.

No one would tell us.

While kids played, some 50 sleep-over parents were trickling in.

Thais was nervous after receiving information that the police had intervened at a nearby youth centre. When we asked her why children were being put at risk, she argued that playing with kids is not illegal.

A growing number of Catalans no longer accept the over-arching framework of the Spanish constitution, it seems. They are putting regional laws above national ones.

Thais rejected the ‘illegal’ label given to the referendum.

“This is not illegal,” she said.

Sunday morning marked the start of Referendum Day. We got up before sunrise. At Thais’ ‘occupied’ school, hundreds of people had gathered.

“We arrived at five o’clock this morning to protect the voting boxes,” explained pro-independence supporter, Anna.

“People think that it has been a democracy after Franco here. But it has been a false democracy,” she said, complaining that websites had been closed and people prevented from meeting and voting.

Catalonia’s prosecutor’s office had ordered the regional police, known as the “Mossos”, to prevent the illegal casting of votes.

“Who is in charge?” they asked.

“All of us!” was the cheerful answer from the crowd.

“We came to confiscate ballot boxes and papers in case you have some,” said one of the men in uniform. “Do you have any? Can we get access?”

“No! We have chocolate!” was the reply. 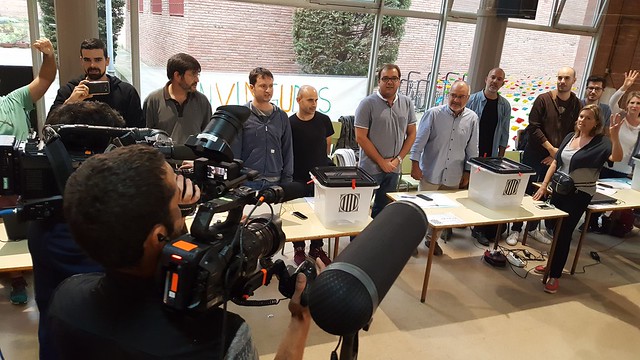 Back on the road, vans of the Spanish national police passed us by.

We had received insider information that the President of the Catalan Parliament, Carme Forcadell, was to vote at a school in Sabadell, north of Barcelona. Would security forces intervene there?

The answer was ‘Yes’.

Replacing the regional “Mossos” units, the national Spanish police took over, forcing their way into the school being used for polling and dragging people out, preventing voting from taking place.

“When I was a student, under Franco’s regime, it was the same, the same,” said one older man, Josep Maria.

As security forces retreated after their intervention, we got insider information that the parliamentary president was to switch to ‘Plan B’ and vote in another school in Sabadell.

Would anti-riot units force their way through the massive crowd there, too, risking an escalation that could lead to large-scale clashes getting out of control?

And then she arrived.

For Catalan Parliament President Carme Forcadell, member of the left-leaning breakaway party Esquerra Republicana, this vote was little short of a lifetime’s achievement.

“I exercised my right to vote,” she said.

“I am proud for the citizens of this country – how they showed their civil responsibility to the whole world, their pacifism and their love for democracy.”

Forcadell is one of the leading voices for Catalan independence and a precious contact for ‘Insiders’ to approach the inner circle of the separatist movement.

Hastily leaving an urgent meeting, it was not easy to catch up with Oriol Junqueras, number two of the Catalan government, and Jordi Sanchez, one of the “masterminds” of the separatist movement.

Sanchez heads the ANC, the umbrella organisation for hundreds of separatist NGOs.

ANC stands for “Catalan National Assembly” and can be considered one of the main driving forces for independence, together with “Omnium”, an organisation defending Catalan culture and language, headed by Jordi Cuixart.

Jordi Sanchez and Jordi Cuixart are the faces and the voices of a myriad of civil society groups pushing for independence. They embody Catalan nationalism.

On October 16, Sanchez and Cuixart were arrested and sent to prison by Spain’s National Court for alleged crimes of sedition. They are being accused of helping orchestrate pro-independence protests last month that trapped national police inside a Barcelona building and destroyed their vehicles. At the time of writing, they are still being held by Spanish authorities.

“This is a great day,” Sanchez told us, as he celebrated the vote.

“It is a fantastic demonstration of democracy by Catalan citizens who have shown amazing civic strength. The repression from the Spanish state has been unlimited. The Spanish government is the shame of Europe. The people of Catalonia have won their right to be recognised as a free nation of this world.”

“It is a moment of great happiness and huge responsibility. The feeling of belonging to a country which could resist this repression – just to exercise its right to democracy – this should be recognised by people all around Europe.”

“Everybody knows that conflicts need political solutions not violence,” Cuixart told us.

“Following article 7 of the European Constitution that says that if one state uses violence against the citizens of Europe, this state will be out of the European Union… this is exactly what Spain did today with the Catalan population and it needs a big rectification from Prime Minister Rajoy.”

Day Three: The Day After

The day after polling, we met Jordi Sanchez again, in front of the Catalan government building in Barcelona.

Just 43 percent of voters participated in the referendum. Citizens with pro-Spain views stayed at home, following the constitutional argument that this vote was illegal.

So we asked Sanchez: How can the referendum be seen as valid – with only a 43 percent turnout?

“There should be no question over the need for a minimum turnout. Never before, in any referendum in Spain, has there been a required level of participation. Even the European Constitution was adopted in Spain with a turnout of less than 50 percent,” he said. 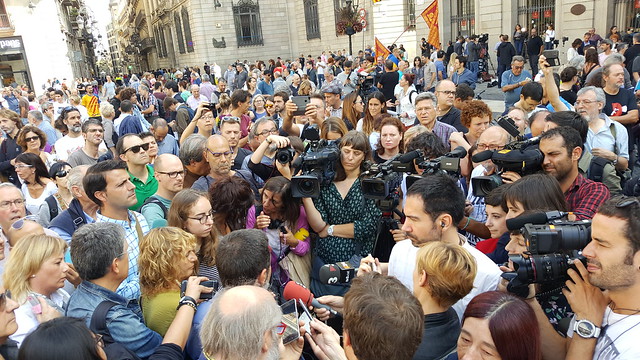 The day after the referendum, we also met up again with pro-Spain activist Llibert.

During his studies, he spent time in Chicago. A room-mate was part of Barack Obama’s election campaign team. So Llibert gained awareness of the power of social media and the potential impact of grassroots movements – and decided to create an NGO himself to fight for the unity of Spain.

Explaining his identity, he said:

“I am from Barcelona, from Catalonia, from Spain and also from Europe. It is not one identity against another.”

On our fourth day of filming, we met up again with Carme Forcadell in her hometown of Sabadell.

Pro-independence groups had called a general strike. The president of the Catalan Parliament agreed that we could follow her closely on camera.

Forcadell made a living from teaching, went into local politics, and then became a street activist. Shortly after joining the ANC, she was elected at the head of this separatist grass-roots organisation, before handing over to Jordi Sanchez.

Without her ability to organise huge mass movements, the idea of Catalan independence would not have got as far as it has. 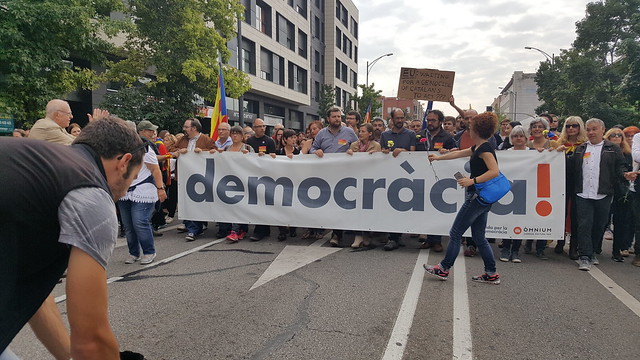 “It is a bitter-sweet emotion,” Forcadell told ‘Insiders’.

“I am very sad about what happened yesterday and I am very happy about the reaction of the citizens of this country.”

But does she have no respect for the Spanish constitution?

“I especially respect human rights, the right of self-determination and the right of all people to decide their own future,” she said.

“I believe that fundamental rights and democratic freedom is above any constitution and also above international law.”

And what about all those in Catalonia who don’t want independence?

“Catalonia is a very pluralistic state and I am proud of this plurality.” she said.

By day five of our filming, the first cracks had begun to appear between the three ruling pro-independence parties in parliament.

It was a tough day for Carme Forcadell. The Assembly’s president was trying to hammer out a common position.

An immediate declaration of independence: Yes or No? – That was the question. 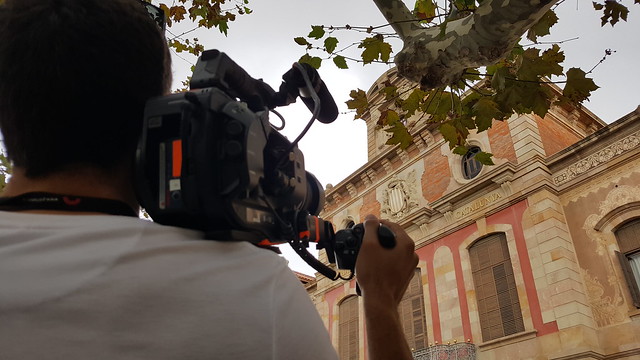 Forcadell’s assistant told us that many leading Catalan politicians risk prosecution, including Forcadell herself. Separatism is a serious offence.

One of the most fervent defenders of Spanish national unity is Xavier Garcia Albiol, the president of the Catalan branch of the conservative People’s Party.

His message was blunt.

“The democratic institutions of Spain are not going to allow this coup d‘état that the regional government of Catalonia is trying to carry out. It will not succeed. So we are going to use all of the resources and all of the tools that the Spanish Constitution places at the disposal of the democratic state.”

Editorial from @elpais_opinion "Declaration of independence would open the door to a dire crisis in Catalonia" https://t.co/geXcc6lR2B

So what is the way out? Can a peaceful, lawful settlement somehow be found? Or is further confrontation inevitable? Calling a snap regional election could blaze a trail out of the crisis.