Austria has been glued to a never-ending story of a highly controversial presidential election campaign since early this year.

Voters eliminated the top candidates of the government coalition parties: the social-democrats and the conservatives both failed to cut it.

Instead opting for a presidential shoot-out between a green party candidate and Norbert Hofer, the front runner for the far right FPÖ.

Judges cancelled the vote because of technical issues.

Austria turned into a polarised society: a new poll in December will see an electorate split into equivalent halves.

How has the FPÖ become so popular?

For almost two decades, he has been playing at events staged by the populist FPÖ party. Otti arranged the music for the FPÖ anthem.

The words are about having “tears of pride” and “not being ashamed” of loving the home-country of Austria.

“The refugee question is one of the important reasons for the success of the FPÖ,” Otti told insiders

“Because… Well, when I think about my mother: she brought up 15 children. Now she just gets a minimum pension of 450 euros.

“But at the same time migrants arrive in the country who never paid into our social welfare system,” he continued.

“I don’t speak against asylum seekers in need for protection, being on the run, their life threatened… of course, we should help, that is our duty.

“But Austrians living beyond the breadline do not understand. We never were confronted with such problems. We always thought we were living on the Isle of the Blessed. But suddenly, from one year to another, everything changed.”

The fear of going to ‘rack and ruin’

Last year, some 10,000 refugees crossed into Austria each day. This changed the political landscape.

The anti-migrant line of the FPÖ is copied by mainstream coalition parties.

So who are the FPÖ‘s voters – and what’s behind the strong support for the party?

“Elderly people too, those who are afraid, that is one of the main motivations, being afraid of going to rack and ruin.

“This fear often concerns people with little or low education, those people being afraid of changes, afraid of globalisation, afraid of refugees, afraid of migrants moving into our country… they are afraid that their chances are minimised.”

They get involved in grass-root activities – such as going door-to-door in difficult and deprived neighbourhoods – spreading and sharing their europhobic views.

“I see the EU as more of a dictatorship than what it should be,” said Gudrun.

“The European Union dictates to other countries what to do, without giving them any chance to modify those orders. That’s not OK, in my opinion.”

Marlene added: “In recent years, the asylum crisis has become an important topic for the FPÖ. Our party is talking about those problems directly.” 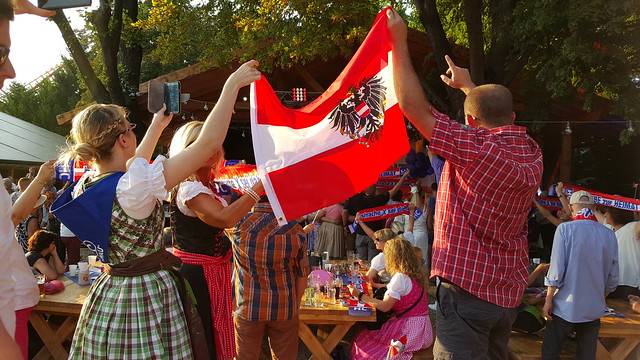 Reliable media are seen as “biased,” migrants accused of “destroying social welfare systems” and “pushing away” native locals from the job market.

The FPÖ says a referendum could fix all of these hot topics. But would it be a threat to democracy?

“There are quotes from Heinz-Christian Strache, the party leader, that he would call for an ÖXIT-referendum: a public vote about Austria leaving the European Union.”

As Strache arrived at a campaign event, we asked him: “should Austria leave the European Union?”

“We’re a Europe-friendly party, we’re living in the very heart of Europe. In reality, Juncker and Schulz should retire. They’re responsible for the Brexit.

“If you want the European project to have a future, you should insist on a Europe of nation states. The EU should be reduced to economic cooperation.

“And above all, Europe should live up to its Judeo-Christian values, those values should be preserved and secured for upcoming generations.”

The FPÖ fights against taking over debts from other EU countries. “Austria first” is how the party slogan goes.

So should Austria try a remake of the “Brexit” scenario to leave the European Union? Is “Öxit” an option?

“I would consider this to be a mistake. Being an EU member state located in the centre of Europe, Austria has the obligation to contribute to positive development of the European Union,” he told insiders

“That means, in my opinion, that we can’t just admit immigration without control.

“Regarding immigration, the right way would be a change in the social welfare system: migrants shouldn’t get access on the very first day of their stay.

The green candidate got 50.3 percent of votes in the invalidated ballot, Hofer 49.7.

A re-run was scheduled for October, then postponed to December.

The fuss could tip the scale in favour of the far right, some analysts say.

Bernhard Weidinger observes Austria’s far right and keeps records of who meets whom.

The extreme far right is well connected across the continent.

“In principle, party-leader Strache steered the FPÖ so far to the right, that personal as well as programmatic overlappings with extra-parliamentary right-wing extremism, and with neo-nazism, are almost inevitable,” said Weidlinger.

“We consider the FPÖ an extreme right wing party.

“The FPÖ has international contacts with corresponding extremist parties and groupings. Some FPÖ party members have repeatedly had public appearances at meetings set up by extreme right wing organisations.

“They sponsor extreme right wing publications in Austria. And they systematically frame all problems, pretending they are caused by foreigners…”

Will Hofer make it? Having a far right president would be a first in Europe since WWII. It’s now down to Austrians to decide, in December.