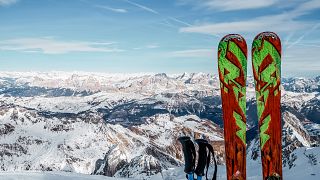 Ski resorts across Europe have been forced to shut as the continent experiences some of the highest January temperatures on record.

Countries including Germany, Poland and the Czech Republic have been hit by a heatwave in the first few days of the new year.

The hot weather has resulted in a lack of snowfall in the mountains.

Several ski centres have closed temporarily or had to resort to artificial snow to keep slopes open.

Across the continent, countries have been experiencing a heatwave in the first days of the year.

Poland, Denmark, the Netherlands, Latvia, Lithuania, Belarus and the Czech Republic have all seen record-breaking temperatures for January.

Areas of the Czech Republic saw 19 degrees Celsius, a temperature usually only reached in spring, while northern Spain is basking in nearly 25C.

Scientists are still trying to understand what’s behind the unusual weather conditions, but say a mass of warm air arriving from western Africa may be the culprit.

No snow in Europe’s ski resorts

The anomalous temperatures have left mountainsides bare and slopes covered in slush.

Popular winter sports destinations have instead sweltered in temperatures normally seen in spring.

France ended the year with some of the highest temperatures in 25 years while in Switzerland’s Jura mountain range the mercury hit 18C.

Ski centres in the northern Alps and French Pyrenees have been forced to close amid the soaring temperatures after only opening around a month ago.

Ski resort Ax 3 Domaines, lying close to France’s border with Andorra, has shut completely while Le Gets and Morzine, in the popular Portes de Soleil area, have both closed all but two runs.

Adelboden in Switzerland is due to host the World Cup skiing on Saturday. The race will now have to take place entirely on artificial snow.

This is not the first year that ski resorts have struggled during an unseasonably warm winter.

Ski operators fear global warming means cold, snowy winters will soon be a thing of the past.

It’s also bad news for mountain towns in countries like Italy, Austria and Switzerland where incomes rely on winter tourism.

"By the end of the century [it's] just going to be over... skiing in the Alps as we know it,” climate science professor Win Thiery told Sky News.

"In the future, these problems will get worse, because the snow will continue to melt as long as the climate warms."