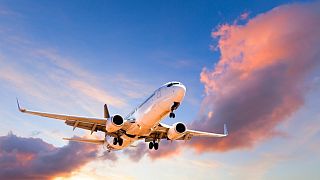 Airlines will no longer be granted free carbon permits for EU flights.   -   Copyright  Canva
By Euronews Green  with Reuters  •  Updated: 08/12/2022

European Union legislators reached a deal on Wednesday to increase the amount airlines must pay for emitting carbon dioxide.

It is hoped this will add pressure on the sector to shift away from planet-heating fossil fuels.

Currently, airlines running flights within Europe have to submit permits from the EU's carbon market (Emissions Trading System or ETS) to cover their carbon dioxide emissions. However, the EU gives them most of those permits for free.

This will mean airlines have to pay for their CO2 permits, providing a financial incentive for them to pollute less.

How have airlines reacted to the free carbon permits phaseout?

Industry group Airlines for Europe says it is "extremely disappointed" with the plan to phase out free permits by 2026.

"This is well before truly effective decarbonisation solutions will be available at the scale needed for them to be effective," the group states.

A smaller amount of free CO2 permits - 20 million - will be made available from 2024-2030 to airlines that use sustainable aviation fuels (SAF) to partly compensate them for the price difference between SAFs and far cheaper fossil fuel kerosene.

"We stand with the sector through the process of the green transition," says the EU parliament's lead negotiator Suncana Glavak.

Why are climate campaigners disappointed by the deal?

Climate campaigners had hoped the law would be extended to international flights. However, aviation carbon emissions permits will continue to apply only to flights within the EU.

Currently, flights travelling to or from outside the EU are covered by the ICAO’s CORSIA offsetting scheme. This will be reassessed in 2026. If the UN agency is not on track to deliver net zero emissions by 2050, the EU will propose extending its carbon market to cover emissions to international flights.

For now, "average European families will continue to pay much more for their CO2 emissions than frequent long-haul flyers," argues Jo Dardenne, aviation director at non-profit group Transport and Environment.

Airlines will also have to start reporting other pollutants including nitrogen oxides and soot particles from 2025, with the EU planning to propose adding those emissions to the carbon market in 2028.

EU countries and the bloc's parliament will now formally approve the law before it takes effect.