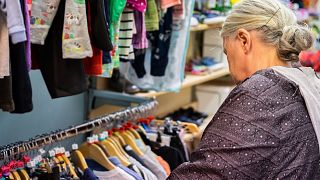 A new study has ranked Europe’s 30 most populous countries on their environmental shopping habits.   -   Copyright  Canva
By Charlotte Elton  •  Updated: 07/12/2022

From mending your old clothes to buying local produce, there are plenty of ways to shop sustainably.

Doing so is an environmental imperative - the fashion industry is responsible for more than 10 per cent of carbon emissions and consumes approximately 100 million tonnes of oil every year. Around a third of the world’s food ends up rotting in landfill before it can be eaten.

A new study has ranked Europe’s 30 most populous countries on their environmental shopping habits.

“Once viewed as an option for hipsters, [sustainable shopping] is now a viable and environmentally-friendly way to shop for people of all ages and income brackets,” the report - by online fundraising platform Savoo - reads.

So which Europeans are leading the pack - and which are falling behind?

Which European country has the most sustainable shoppers?

To calculate an overall ‘sustainability score,’ researchers ranked countries on a number of different metrics.

The number of ‘flea markets and antique stores’ also factored in, as did the amount of textile waste and per capita household waste.

Overall, they ranked Finland in the top spot. This is largely because of its excellent SDG score, at the top of all 193 UN member states.

The Scandinavian country also reduced its consumption footprint by more than a fifth between 2010 and 2020.

On the other end of the spectrum, Malta ranked as the worst country for sustainable shopping.

The small island nation had the lowest SDG score of any country on the list, and increased its consumption footprint by 10.5 per cent between 2010 and 2020.

Which European country is best for flea markets?

The UK has the most flea markets, according to Savoo, with 1,300 flea markets catering to its population of 68 million people.

Flea markets and antique stores are one area that top-ranked Finland falls behind in, with just 53 in total to cater to its 5,540,720 population.

Which European country reduced its consumption footprint the most over the past 10 years?

Italy has reduced its consumption footprint by an impressive 26.03 per cent over the past 10 years. It is closely followed by Sweden (21.99 per cent) and Greece (20.75 per cent).

But the Mediterranean country falls down on other rankings. Italy has some of the highest per capita textile waste in the EU, producing more than 200,000 tonnes per year.

Overall, the EU’s consumption footprint decreased by four per cent between 2010 and 2020.

Which European country recycles the best?

Germany was the top recycler of municipal waste in the European Union in 2020 - the last year for which data exists - with an estimated recycling rate of 67 per cent.

Just eight EU countries have a recycling rate higher than 50 per cent. Countries such as Cyprus and Romania have recycling rates lower than 20 per cent, while bottom-ranked Malta recycles just 11 per cent of its municipal waste.

Which European country has the highest level of household waste?

Slovenia produces an estimated 34 kg of household waste per capita each year - the lowest of all European countries. Austria follows closely behind, with an estimated 39 kg produced per capita yearly.

On the other end of the spectrum sits Greece, where per capita household waste is estimated at 142 kg per capita.

How bad are food and clothes waste for the planet?

Creating virgin polyester - the key material in lots of brand clothing - is a carbon intensive process.

But despite the climate footprint of every new garment, the average consumer throws away 60 per cent of new clothes in the same year they were bought.

Food production and consumption also have a massive carbon footprint responsible for around 30 per cent of greenhouse gas emissions. Nearly a billion tonnes of food is thrown away every year.