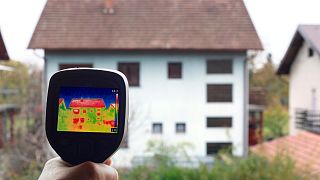 Climate change is increasingly visible in Europe in big ways and small; from devastating wildfires in Spain this summer, to December snowdrops in the UK.

It’s important to join the dots of this crisis, and one of the key ways we can do so is by tracking global warming.

Between 2012 and 2021, global average near-surface temperatures were 1.11 to 1.14 °C warmer than pre-industrial times. That decade is now the warmest one on record.

Global warming is especially rapid in Europe. European land temperatures increased by 1.94 to 1.99 °C in this period, according to the European Environment Agency.

How is global warming affecting our lives? As a simple example, we now need less heating and more cooling. The need to heat buildings has decreased over the last decades, while the need to cool them with air conditioning has increased.

What are heating/cooling degree days?

The findings described here are based on heating degree days (HDD) and cooling degree days (CDD) - but what are they? According to Eurostat, HDD and CDD are weather-based technical indexes describing the energy requirements of buildings in terms of heating and cooling.

These indexes reflect the severity of the cold or heat in a specific time period, taking into account both the outdoor temperature and average room temperature. Essentially, based on the mathematical calculations, they reveal the need for heating or cooling buildings. (Not the number of days you need to turn the heating on for).

Here’s how Europe’s need for heating has changed over the last four decades.

Which countries have seen the biggest decline in heating needs?

Portugal had the highest decrease of 1979-2021, at 28 per cent, followed by Malta (22 per cent) and the Netherlands and Ireland (both 21 per cent). Hungary and Slovakia had the lowest rates of change as the HDD value fell by only 3 per cent for both countries.

The need for heating also decreased by 6 per cent in Finland, 10 per cent in Norway, and 11 per cent in Sweden. These Nordic countries were the top three in terms of average HDD between 1979 and 2021.

Changes in CDD are more evident than changes in HDD. The average CDD value in 2021 was almost three times higher than that of 1979. The increase from 37 CDD to 100 CDD over the last 42 years means that cooling needs have shot up by 170 per cent.

In 1979, CCD values were almost zero in many EU countries. For this reason, instead of looking at percentage changes, it’s more meaningful to compare values between 1979 and 2021. Several countries that needed almost no cooling 40 years ago require it now.

Can you imagine people in Latvia, where the average annual air temperature is 5.9 °C, needing to cool their buildings?

Can you imagine people in Latvia, where the average annual air temperature is 5.9 °C, needing to cool their buildings? Scientific findings suggest they do. The CDD of Latvia was only 0.23 in 1979, but it rose to 42 in 2021. This is still a very low value compared to some other countries, particularly Mediterranean ones. However, it is higher than the CDD of France, where thousands of people died in heatwaves in 2022.

HDD values tell us how much heating is needed in each country. This varies significantly across Europe. Not surprisingly, Scandinavian countries have the highest HDD values, meaning that they need the most heating.

These highest and lowest values mean that the need for heating any particular building was ten times higher in Finland than in Malta in the last 42 years.

EU countries have focused on diversifying their energy sources following Russia’s invasion of Ukraine. The EU aims to end its energy dependency on Russia, which previously supplied 40 per cent of the natural gas used in the EU. People across Europe are very worried about their heating bills due to dramatic rises in energy prices.

You might imagine that the current energy crisis would hit the countries with highest HDD values the hardest, but this isn’t necessarily true. It also depends on how each country meets its energy needs and the energy dependency rates.

In response to the current energy crisis, the European Commission presented the REPowerEU Plan for saving energy, producing clean energy, and diversifying energy supplies. This plan suggests that the most immediate savings can be achieved with better insulation for high temperatures.

REPowerEU calls on Member States to reduce the VAT rates for high-efficiency heating systems and insulation for buildings.