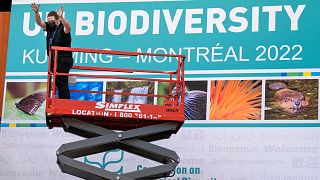 Workers set up the Montreal Convention Centre in preparation for the COP15 UN conference on biodiversity in Montreal.   -   Copyright  Paul Chiasson/The Canadian Press via AP
The opinions expressed in this article are those of the author and do not represent in any way the editorial position of Euronews.
By Craig Bennett & Clare Shine  •  Updated: 06/12/2022

Craig Bennett is the Chief Executive of the Wildlife Trusts and Clare Shine is the CEO of the Cambridge Institute for Sustainability Leadership.

Our collective dependency on nature has long been understood. As the UN’s biodiversity summit gets underway, now is the time to ditch the lip service and finally act on this truth.

Every culture has its sacred documents. For American citizens, it’s the Constitution. For followers of Rabbinic Judaism, it’s the Talmud. For medical practitioners, it’s the Hippocratic Oath.

Biodiversity is no exception. In the 28-page United Nations Convention on Biological Diversity, every individual plant and animal species on the planet has its “intrinsic value” affirmed, celebrated and – theoretically – protected.

The critical importance of healthy ecosystems and Indigenous and community knowledge are spelled out in print.

In many ways, this quasi-bill of rights for biodiversity is one of the most progressive and visionary political statements ever drawn up. It is also one of the most spectacularly ignored.

This quasi-bill of rights for biodiversity is one of the most progressive and visionary political statements ever drawn up. It is also one of the most spectacularly ignored.

Thirty years after the Convention was signed at the landmark 1992 United Nations’ Earth Summit, a quarter of known species are facing extinction, according to a recent IPBES report.

Our oceans, forests, and other biodiversity-rich ecosystems are all dangling on the edge of potentially catastrophic tipping points from which there is no return. People closest to the ground are worst affected.

Urgent action is the rallying cry as delegates convene in Montreal this week for the UN’s COP15 summit. But what actions are required and by whom?

What needs to be decided at COP15?

The answer lies in the preamble of that same UN Convention. Conserving biodiversity, the document states with unambiguous clarity, is the “common concern of humankind”.

It doesn’t say it is the narrow concern of policymakers, scientists, or nature conservationists – important as their respective contributions are. Nor does it narrow down conservation priorities to specific habitats or species. With nature, it’s either all or – very quickly – nothing.

Most importantly, “common concern” implies the integration of biodiversity into all aspects of decision-making, both private and public, both local and global.

Why? Because biodiversity, by its nature, is expansive. For all our efforts to the contrary, living systems cannot be contained in neat siloes or administratively convenient boxes.

Nowhere is this more important than in the battle against climate change. As bees are to pollen-bearing flowers, so healthy ecosystems are to stable temperatures.

The Edinburgh Living Landscape project provides one of many stellar examples of this intrinsic symbiosis.

It was developed by a partnership of organisations including the Scottish Wildlife Trust, The City of Edinburgh Council, the Royal Botanic Garden Edinburgh and many others.

This ‘nature-based solution’ encourages interventions such as tree planting and wetland regeneration as a means to connect green infrastructure and rehabilitate degraded habitats.

At a global level, policymakers are increasingly recognising the crucial role that biodiversity plays in regulating global temperatures. According to UK conservation charity WWF, almost every (92 per cent) signatory to the Paris Agreement now includes nature-based solutions in their national climate plans.

The pandemic has left us more connected to nature

Humanity’s love of and need for nature marks another common theme that binds us all. If the tragedy of COVID left us with any positives, surely it is the collective renaissance in connection to nature.

More than half of adults in England report spending more time in outdoor pursuits than before the pandemic – a trend that brings measurable improvements to mental and physical health.

The experience of COVID also taught us the value of biodiversity on our doorstep. For too long, nature has been cast as something exotic and remote – and consequently inaccessible – for the more than two in three people who now live in cities.

Nature remains the great outdoors, but it’s also the park at the end of our street and the river running through our city centre. With 85 per cent of the world’s population projected to be urban by the end of the century, nature’s future lies firmly in the hands of city-dwellers.

Nature remains the great outdoors, but it’s also the park at the end of our street and the river running through our city centre.

By the same token, COVID brought home the threat to our common wellbeing when the interdependence between human and planetary health is mismanaged.

Scientists have long been warning that our continued incursion into biodiversity-rich areas could see harmful viruses spread from animals to humans. It is a reality already illustrated by zoonotic diseases such as HIV, Ebola, SARS, and most recently COVID and Monkeypox.

Affirming biodiversity as a common concern of humankind is not just an invitation to flag our universal connection to nature. It also serves as a powerful push to rethink our collective relationship with the natural world around us.

That starts with a dramatic ratcheting up of government efforts to protect it.

Agreeing to a “30 by 30” target, aimed at jointly conserving 30 per cent of land and sea areas globally by 2030, would provide the world with a much needed unifying goal – just like the 1.5C target set by the Paris Agreement.

With an active war in Europe and national economies in slowdown, it is tempting for politicians to brush over today’s biodiversity crisis.

Though this is a politically convenient position, it is catastrophically short-sighted.

As campaign groups stated in an open letter to UN Secretary General Antonio Guterres, this is about “saving our life support system”.

What is political leadership for if not this?

Overexploitation of natural resources has to stop

The worlds of business and finance need to step up and lead.

The model of overexploiting natural resources for profit is not only destructive but self-defeating. There is no viable business on a ransacked, collapsing planet.

In contrast, a regenerative approach to the use of nature’s abundance offers the best – and only – chance of sustainable success.

Progressive businesses and entrepreneurs already understand this. Be it through biomimicry or biophilic design, ecological processes and the inspiration of nature are driving innovation in everything from material design to healthcare.

Meanwhile, we are witnessing pioneers in areas such as agroforestry and sustainable fisheries reset the model for what normal looks like.

The planet’s natural ecosystems have taken millennia to evolve. If we fail to act now, their entry into terminal decline on our watch is inevitable.

Giving up is not an option if we want to safeguard a living and liveable planet. As a global society, we have a duty of hope.

Treating nature as our common concern is not only the best way to meet that obligation; it’s the only way.