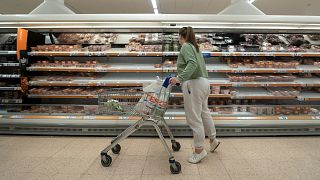 Amid shortages of some items, food inflation reached a record high in the UK during November.

The country is heading for a “bleak” winter as prices continue to soar, according to the British Retail Consortium (BRC) - particularly for meat, eggs and dairy.

“Christmas cheer will be dampened this year,” warned Helen Dickison, chief executive of the BRC - though that price rises may start to ease in 2023.

Beyond inflation, shortages and stretched supply chains are also showing on supermarket shelves with empty spaces where staple items can usually be found.

Why is there an egg shortage in the UK and how will it affect me?

Some supermarkets in the UK have reported shortages in the supply of eggs over the last month. The scarcity has led to limits on the number of boxes customers can buy in major chains like Tesco, Asda and Lidl.

According to the Department of Environment, Food and Rural Affairs (Defra), the egg market has been impacted by the rising cost of energy and animal feed - partly caused by Russia’s invasion of Ukraine - as well as an outbreak of avian influenza.

“We understand the difficulties that rising costs for feed and energy over the last year, combined with the bird flu outbreak, are causing farmers and are working with the industry to monitor the egg market,” a Defra spokesperson said.

The complicated combination of factors contributing to the pressure on the egg market means it isn’t clear when the shortage is likely to end.

But Defra says the UK’s food supply chain is “resilient”.

“There are 38 million laying hens across the country and we are not expecting any significant impact to the overall supply,” the spokesperson added.

Will there be shortages of other foods?

As well as adding to the factors that have led to egg shortages, bird flu is also causing chaos for poultry supplies.

Consumers should expect shortages of British free-range turkeys this year, Chief executive of the British Poultry Council Richard Griffiths warned this week. He told the government’s Environment, Food and Rural Affairs Committee that 1 million of the usual 8.5-9 million turkeys produced in the UK have been culled or died from bird flu.

Soaring energy prices - combined with a lack of people to pick crops - are also affecting fruit and vegetable growers.

The cost of production for farmers has increased by as much as 27 per cent in the last 12 months, according to a report from agricultural consultants Promar International. Foods like tomatoes, broccoli, apples and root vegetables have been affected the most.

The National Farmers’ Union (NFU) warns it could pose a serious threat to the UK’s fruit and vegetable industry.

“The viability of producing fruit and vegetables is under the greatest strain I’ve ever seen,” said NFU horticulture and potatoes board chair Martin Emmett.

A lack of reliable workers combined with sharply increasing costs - especially for energy - has put many businesses “on a knife edge,” he added.

“Growers are doing everything they can to mitigate the impacts, but they cannot do it alone. If this pressure continues, it will be simply unsustainable for some businesses to continue as they are.”

Where are food prices increasing in the UK?

Prices of some food items in particular have soared in the UK in the last year.

In July, the UK’s largest producer of milk and butter Arla Foods warned that the country was on the edge of a shortage. A massive shortfall of workers meant farmers had to cut back on production.

Though this shortage hasn’t yet materialised on supermarket shelves, milk and butter prices have significantly increased.

There has also been talk of a “potato crisis” as this crop suffers from the impact of climate change.

“There’ll be many more plant-heat stress days, as many as 60 by 2030 – that’s only eight years away,” Torrance added.

Potato prices have already increased by almost 20 per cent and could double this winter.

Overall, climate change and fossil fuel prices could cause food inflation to be around 11 per cent in 2022, according to a report by the Energy and Climate Intelligence Unit.