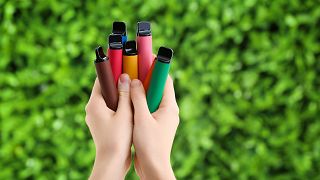 Tobacco waste is one of the biggest sources of plastic pollution on the planet.

Trillions of cigarette butts are tossed, flicked and chucked away each year, littering the earth’s soil and seas with toxic chemicals and harmful man-made plastics.

However, this is fast being matched by another stream of waste: e-cigarettes.

Marketed as a less unhealthy alternative to tobacco smoking, vaping is posing a colossal threat to the environment.

What is the problem with e-cigarettes?

E-cigarettes have exploded in popularity over the last few years.

They are commonly used by people wishing to quit smoking, though many young people now take up vaping directly.

E-cigarettes themselves come in many shapes and sizes. Some are reusable and can be refilled with single-use plastic cartridges, while others are entirely disposable. This creates waste - and lots of it.

Research by Material Focus found that around 1.3 million single-use e-cigarettes are thrown away in the UK every week - equivalent to two every second.

By the time you finish reading this article, 100 would be sent to landfill.

“With the vape market mainly owned by the tobacco industry, it is legitimate to question whether vaping is more eco-friendly than smoking, or whether the tobacco industry has gone from bad to worse,” researchers Jérémie Pourchez, Clément Mercier and Valérie Forest wrote in a scientific paper on the topic.

“A new threat is now facing our planet: vape waste,” they added.

A key part of the problem is that single-use vapes are rarely recycled, with only 30 per cent being re-used. Coated in brightly coloured plastic, they use precious metals - notably in their lithium batteries.

Disposable e-cigarettes are the most popular form vape, especially among young people.

On average, they contain 0.15g of lithium, with over 1.3 million thrown away every week. This equates to 10 tonnes of lithium a year, equivalent to the lithium in batteries inside 1,200 electric vehicles.

But the problems don't stop there.

As their batteries and circuit boards break down, vapes leach toxic chemicals into the environment, while their casing grinds down into harmful microplastics. When they are recycled, the components pose a fire risk creating another headache even when they are disposed of properly.

Are people aware of the environmental impact of vaping?

Most people don’t consider what happens to their e-cigarette when they toss it away.

Nearly half of young people don't know what to do with used devices once they are finished. More than half report throwing them in the rubbish, research by Truth Initiative, a smoking and vaping awareness organisation, found.

There are also issues with the products themselves.

Manufacturers often don’t offer clear guidance on how to dispose of them or they advertise vapes as disposable, rather than encouraging recycling.

“We need to take urgent action now and ensure that they get recycled,” said Scott Butler, executive director of Material Focus.

Throwing away vapes means that we are throwing away some of the most precious materials on our planet.

“Throwing away vapes means that we are throwing away some of the most precious materials on our planet."

He puts the responsibility on those making and selling e-cigarettes, saying they needed to do more to tackle the crisis.

“Producers and retailers need to work together to ensure that they should make people aware that vapes should never be binned and instead be recycled,” Butler added.

“Recycling needs to be made easier and manufacturers and retailers can become part of the solution by adding collection points in-store.”

Others believe the state needs to step in to promote safe recycling and minimise waste through regulation.

“Fortunately, vape waste is a preventable environmental disaster, but for this disaster to be averted, disposable e-cigarettes must be better regulated,” write scientists Jérémie Pourchez, Clément Mercier and Valérie Forest.