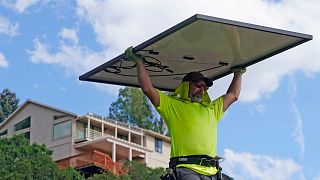 Renewable energy is on track to produce more energy than coal in the US this year.

According to figures from the US Energy Information Administration (EIA), more than a fifth of all electricity by the end of 2022 will come from hydropower, wind and solar.

That is higher than coal at 20 per cent and nuclear at 19 per cent. The only other year this happened was 2020 when energy generation was reduced due to the COVID-19 pandemic.

How is energy generation in the US changing?

After peaking around a decade ago, coal has seen a gradual decline in its share of energy production. This is set to drop from 20 to 19 per cent, according to the EIA.

Overall energy consumption is expected to fall next year as economic models predict that US Gross Domestic Product (GDP) will drop slightly.

Researchers warn, however, that rapid growth in renewables is still needed for the US to meet its climate targets.

Will the US meet its renewable energy targets?

This target commits the world’s biggest economy to cutting emissions by 40 per cent below 2005 levels by the end of the decade.

But to do this, the growth of wind and solar in the US needs to ramp up significantly. The country needs to install around 50 gigawatts of these renewables every year between 2022 and 2024, researchers at Princeton University estimate. This is roughly double what was installed annually in 2020 and 2021.

Just 11 gigawatts of wind and solar were installed in the US in the first nine months of this year. Experts expect this to pick up as the Inflation Reduction Act, approved earlier this year, sees $369 billion (€354 billion) in clean energy investments.