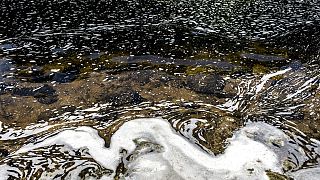 A new technology developed in Australia can extract harmful chemicals from rainwater, solving one of the most insidious threats to human health.

It works by harnessing sunlight and chemical processes to separate substances in the water, such as forever chemicals, and then skims them off the surface.

The high-tech, €13 million facility, located at a rubbish tip in Darwin northern Australia, can filter out toxic substances that mix with rainwater and run into the ground.

Darwin Lord Mayor Kon Vatskalis explained how the rain coming through the decomposing rubbish collects at the bottom of the tip and picks up “nasties”.

“Then what do you do with it? If you discharge it into the environment, the results will be catastrophic,” he said. “It will destroy everything."

Darwin has long grappled with the problem of hazardous “forever chemicals”, known as PFAS, leeching in its waterways and reservoirs.

Leachate is filtered water that has had some substances removed.

The plant extracts PFAS and other heavy metals from rainwater collected at the Darwin tip, using state-of-the-art equipment.

The process, known as Low-Energy Evaporative Fractionation or LEEF, uses minimal energy and no chemicals or consumables, according to Hunter.

Foam fraction is a process that separates molecules within a liquid. It is commonly used to remove organic waste from aquariums.

"All of the water that's treated [at the tip] is reused and irrigated on site," explained Dave Leinster, design manager for the project.

It has even been used to grow grass.

Darwin’s local council has hailed the multi-million euro plant as a success. They want to roll the project out across Australia.

Per-or poly-fluorinated alkyl substances (PFAS) are harmful chemicals used in a range of products such as non-stick frying pans, food packaging and toiletries.

They are linked to increased health risks in humans, such as cancer and infertility, and do not break down in the environment.

High levels of PFAS have been found in several of Darwin’s waterways, with Rapid Creek and the Katherine River especially affected.

Many of these harmful chemicals come from piles of rubbish, leaching into the local environment through rainwater.

They take thousands of years to break down.

In August, scientists found that rainwater almost everywhere on earth has unsafe levels of forever chemicals.

The researchers at the University of Stockholm detected the toxic substances in some of the most remote locations on the planet, including Antarctica.