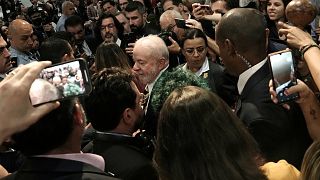 It’s day ten in Egypt and we’re nearing the end of the UN climate conference.

Concerns are being raised that progress on a loss and damage fund is going nowhere. Brazil’s Luiz Inacio Lula da Silva received a warm welcome as he addressed COP27 this afternoon.

So what happened on Wednesday in Sharm El Sheikh?

Earlier this week, US Special Climate Envoy John Kerry said that some countries had objected to including the 1.5C global warming target in the final COP27 text.

But today, G20 leaders reaffirmed their commitment to keeping the Paris Agreement goal “within reach”.

"Mindful of our leadership role, we reaffirm our steadfast commitments, in pursuit of the objective of UNFCCC (United Nations Framework Convention on Climate Change) to tackle climate change by strengthening the full and effective implementation of the Paris Agreement and its temperature goal," they said in a declaration at the end of meeting in Indonesia on Wednesday.

The G20 represents around 75 per cent of the world’s emissions and a statement from the group could help boost negotiations at the UN climate summit.

The group urged delegates at COP27 to “urgently scale up” mitigation and adaption efforts.

2. President-elect Lula da Silva tells COP27 that ‘Brazil is back’ as a climate leader

Brazil's Luiz Inacio Lula da Silva received a warm welcome at COP27 today. Hundreds of people gathered to see him speak at a side event earlier in the day with crowds chanting his name.

Later in the day, he addressed a packed room at the climate conference declaring that “Brazil is ready once again to join the effort to build a healthier planet.”

“The survival of the Amazon also depended on the election. Civilisation and values are back. Respect and human rights are back,“ Lula said.

He also spoke about his pledge to protect the Amazon saying that the country will do “whatever it takes to have zero deforestation.”

Lula highlighted that environmental crimes had grown in a “scary way” under the previous government, adding that the government will work to punish illegal activities by gold miners, loggers and farmers.

Lula also announced that the Brazilian government is planning a ministry for Indigenous people “so they can have their own voice.”

The Brazilian President-elect proposed that the UN climate conference be held in Brazil in 2025.

“There are many cities that could host Cop30. I want to say it should be in the Amazon region,” adding that he wanted everyone in the room to fully understand the importance of the region.

3. Concerns over the progress of loss and damage funds grow

As we approach the end of COP27, there are concerns that progress on a loss and damage fund is too slow.

For some of the most climate vulnerable nations, an agreement on loss and damage will be the measure of success for this UN climate conference.

The Pacific island state of Vanuatu said today that it will consider COP27 “a failure” without a new fund for vulnerable nations to tackle the effects of climate change.

Its climate minister Ralph Regenvanu reminded reporters that the nation was the first to introduce the term loss and damage at UN climate negotiations in 1991.

Former Irish President Mary Robinson also said that she was concerned about the state of negotiations.

At overnight talks between members of the Santiago Network - a UN scheme providing technical support to countries faced with damages from climate fuelled natural disasters - some countries were delaying progress.

"China and Saudi Arabia - and I'm naming names... are trying to block technical assistance for loss and damage going to the most vulnerable countries," she said.

Robinson is a member of a group of prominent former global leaders known as the Elders. She said that they were keen to see a deal on loss and damage agreed at the talks in Sharm El Sheikh.

As COP27 heads towards a conclusion, government officials and campaigners now have their sights set on COP15 next month - the UN’s biodiversity conference.

The architects of the landmark climate deal say that this will be an “unprecedented” opportunity to turn the tide on nature loss.

They are calling for a fully-fledged agreement under which countries would set national conservation targets and routinely report on their progress.

“And it must deliver, through the whole of society, immediate action on the ground – our future depends on it.”

5. EU and four member states to provide more than €1 billion for climate adaptation in Africa

EU climate policy chief Frans Timmermans told COP27 today that the bloc and four of its member states will provide more than €1 billion for climate adaptation in Africa.

The four countries were France, Germany, the Netherlands and Denmark. Timmermans said that this was just a starting point with others able to join in on the initiative.

Some of the key pillars for this project will be improving early warning systems, better funding for internal climate adaptation programmes and creating new "risk and insurance" systems.

"The climate crisis is already here, causing disastrous floods, severe droughts and massive heatwaves across the world," Timmermans said in a statement.

"We all face this challenge but African nations are among the most vulnerable."

He also said that a small amount of this fund, around €60 million, will be earmarked for loss and damage. The EU will also present ideas to get stalled negotiations on the issue moving.