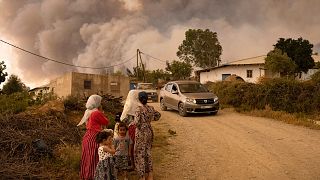 Moroccan women and children stand on a mountainous side road as wildfires sweep the region of Chefchaouen. Women are disproportionately impacted by climate change.   -   Copyright  AFP
By Charlotte Elton  •  Updated: 11/11/2022

Women in the Global South should be “leaders, not victims’” of climate action, COP27 campaigners have urged.

More than 40 grassroots women’s organisations in Asia, Africa, and Latin America have formed an alliance to demand that governments increase climate financing for local women’s movements.

These movements - based in Indigenous communities and developing nations - are too often “invisible” to funding bodies, they claim.

The Women in Global South Alliance for Tenure and Climate will work to change that, says Omaira Bolaños, Director of the Latin America and Gender Justice Programs at the Rights and Resources Initiative.

“Even where funding is reaching Indigenous, Afro-descendant, and local women’s organisations, it tends to be inadequate and short-term,” she warned.

“The Women in Global South Alliance for Tenure and Climate is a grassroots advocacy network urging donors and governments to rectify this historical gap in access to direct climate finance for women and girls.”

How much climate financing have governments committed to women and girls?

Governments have made various commitments to Indigenous peoples and women - but the money doesn’t always end up where it is needed most, campaigners say.

Yet just eight per cent of these funds reached organisations working in developing countries and only a fraction of this reportedly went to grassroots women’s rights organisations directly.

On the other hand, money earmarked for Indigenous forest management and community tenure specifically mentions women and girls just 32 per cent of the time.

The result is a blind spot in global climate financing, campaigners claim.

Indigenous women’s organisations received only 0.7 per cent of all recorded human rights funding between 2010–2013.

“Indigenous, Afro-descendant, and local community women and girls should be leaders of climate action, not victims of climate policies,” said Archana Soreng, youth climate activist from the Kharia Tribe in India.

“Climate finance must not leave Indigenous, Afro-descendant, and local community women and girls behind. We are working on a global issue that needs global perspectives which is what the formation of this new women’s alliance is about.”

Why is funding for Global south women’s movements important for fighting the climate crisis?

Around a quarter of global land area is owned, managed, used, or occupied by Indigenous Peoples.

This means Indigenous-managed land is critical to securing the survival of delicate ecosystems and protecting biodiversity.

Women often have important land rights and leadership roles in this protection, according to Rights and Resources, a global campaign coalition - yet they are rarely protected.

“The tenure rights of women - who comprise more than half the population of the world’s Indigenous Peoples and local communities - are seldom acknowledged or protected by national laws,” they claimed in 2019 analysis.

Seventy per cent of the 1.3 billion people living in conditions of poverty are women. Though women predominate in the world's food production (50-80 per cent), they own less than 10 per cent of the land.

But dire thought these figures are, there is reason for some optimism.

In a 2021 report they estimated that implementing these solutions would cut emissions by 68.9 gigatonnes of carbon dioxide. A gigatonne is a billion metric tonnes. For comparison, the U.S was responsible for 5 gigatonnes of CO2 last year.