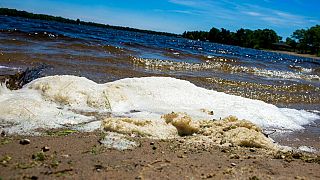 California is suing a slew of major chemical companies over “staggering” water contamination from forever chemicals.

The US state launched legal action against 3M Co, DuPont de Nemours Inc and 16 smaller other chemical companies on Thursday.

The lawsuit accuses the companies of knowingly marketing highly toxic forever chemicals, which have polluted waterways and human bodies.

Both 3M and DuPont have vowed to fight these claims and defend their record on “environmental stewardship”.

What are forever chemicals?

Forever chemicals are highly toxic for humans and the environment.

They never break down and build up in our bodies, and have been linked to cancer, growth defects and other serious health problems.

This legal action is the latest in a series of cases over the years where US cities and states have sued more than a dozen manufacturers and sellers of the harmful chemicals.

Collectively known as per- and polyfluoroalkyl chemicals (PFAS), these substances are used in many everyday items such as firefighting foam, nonstick frying pans, cleaning sprays, water-repellent sports gear, stain-resistant rugs, cosmetics and countless other products.

Announcing the lawsuit on Thursday, California Attorney General Rob Bonta alleged that the companies knew about the toxic impact of PFAS and covered it up.

“This is a very unique case in that it is statewide, the first-of-its-kind, of course, in the largest state in the nation, the fourth-largest economy in the world, and seeks statewide relief,” Bonta said at a press conference.

“No other case of this nature exists in the United States of America.”

What impact have they allegedly had on the environment?

The lawsuit filed against 18 companies seeks damages as well as the statewide treatment and destruction of PFAS. This includes removing them from drinking water and irrigation systems.

Bonta estimated damages to be in the hundreds of millions of dollars.

“We believe these complaints are without merit ... We look forward to vigorously defending our record of safety, health and environmental stewardship,” he added.

In a statement, 3M spokesperson Carolyn LaViolette said the company "acted responsibly in connection with products containing PFAS and will defend its record of environmental stewardship."

Forever chemicals have been found in drinking water, rivers, lakes, wildlife and the bloodstreams of about 98 per cent of California’s approximately 39 million people, says Bonta.

Nearly 146 public water systems and aquifers providing millions of Californians with water have also been found to contain PFAS.

"The damage caused by 3M, DuPont, and other manufacturers of PFAS is nothing short of staggering, and without drastic action, California will be dealing with the harms of these toxic chemicals for generations," Bonta said.

Thousands of lawsuits have been filed against chemical companies in the last two decades for health and environmental damage from PFAS.

3M alone faces more than 2,000 lawsuits by individuals, water authorities, states and cities suing for contamination allegedly from PFAS chemicals. They could cost the company up to €30 billion, according to Bloomberg.

“As a result of a decades-long campaign of deception, PFAS are in our waters, our clothing, our houses, and even our bodies,” Bonta said in the statement.