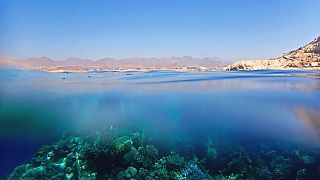 The Egyptian resort town of Sharm El Sheikh has been transformed into the epicentre of efforts to address the climate crisis as it hosts COP27.

But the coastline on which the UN climate conference is being held is more than just a backdrop for official negotiations.

The coral reefs that have long drawn tourists to the Red Sea peninsula are among the most biodiverse in the world. They are home to over a thousand different species of fish and around 350 coral species.

Mindful of their global importance, the United States Agency for International Development (USAID) has announced a major new fund to support the local ecosystem.

The US agency has contributed $15 million (€14.9) to the Global Fund for Coral Reefs (GFCR), it revealed at COP27 on Tuesday.

This initiative is the largest global blended finance vehicle - whereby development aid is used to mobilise additional private or public funds - dedicated to the UN Sustainable Development Goal on ‘Life Below Water’.

The fresh injection of funds takes the total amount of money mobilised by the GCR since it was launched at the 75th UN General Assembly in September 2020 to $187 million (€185.9 million).

Why are Egypt’s coral reefs so important, and how will the funding help?

As well as being astonishingly beautiful and rich habitats in their own right, the fate of coral reefs is one of several major ‘tipping points’ that could push us into climate catastrophe.

As ocean temperatures rise, some reefs are being bleached almost every year. It has caused the deathly pale appearance of swathes of Australia’s Great Barrier Reef.

Given their unique potential to withstand increasing impacts of climate change, the Red Sea reefs might be the most resilient on Earth.

Protection of ‘coral refugia’ reefs - those in climate cool spots - is critical as they offer the global community the opportunity to safeguard ecosystems. They can also act as seed banks that could bring degraded reefs back to a vibrant and productive state, explains Nicole Trudeau of the UN Development Programme.

The funding will ‘incubate and scale’ business models that address local drivers of coral reef degradation - including overtourism.

It also aims to increase the resilience of local communities - a key part of GFCR’s approach in the 12 countries where it works, from Mozambique and Indonesia to Sri Lanka and Micronesia.

“In the face of an intensifying climate crisis, USAID’s investment in the Red Sea Initiative will help to drive a nature-positive economic transition while boosting the climate resilience of coastal communities in Egypt,” UNDP Administrator Achim Steiner adds.

“[It is] demonstrating that change is possible when leadership, political will, and investment comes together.”

Many more ‘blue finance’ announcements - concerning mangroves and seagrass as well as reefs - are expected in the coming days at COP27.

A High Quality Blue Carbon Principles and Guidelines report, for example, is set to launch on Saturday.

"Nature-based solutions are being discussed at COP, but we still need to amplify the central role of nature in our climate mitigation and adaptation strategies,” marine conservation expert Josheena Naggea tells Euronews Green.