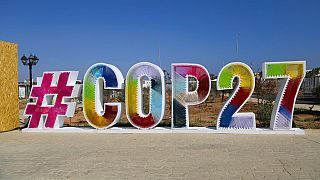 Climate activists are being sidelined and excluded from COP27, one environmental campaigner told Euronews.

Nyombi Morris, a Ugandan activist and climate migrant, says he and his fellow campaigners are being denied access to “negotiation tables” and pushed to the fringes of the climate summit in Egypt.

“We came to represent hundreds and hundreds of thousands of people,” he continued. “But they are not allowing us to enter the room or share our stories.”

“That’s how they silence our voices.”

Last year, 24-year-old Morris could not attend COP26 in Glasgow because he did not have enough money to fund the trip to the UK. It prevented him from presenting a report by his organisation Earth Volunteers.

With this year's COP on the African continent, the Ugandan climate campaigner was invited as an “observer” at the conference. Though he says, this was largely superficial and hasn’t allowed for any meaningful engagement at the event.

“I am happy that they invited me,” he says. “But I was wondering: what am I doing here? There is nothing I can do.”

‘I wanted to share my story as a climate migrant’

Morris was hoping to share his experience as a “victim of climate change”- particularly how our warming world is affecting Uganda.

In 2008, catastrophic flash floods hit the country’s eastern Butaleja district, where Morris and his family lived.

Their home and 400 others were destroyed, forcing the family to seek out a new life in Kampala, the Ugandan capital.

“I wanted to share my story as a climate migrant,” Morris told Euronews.

“My mum didn't know about the impacts of climate change, neither did my dad.”

He described how life in the city was “extremely difficult” and his family soon fell apart under the strain. His father was unable to make a living and left them when Morris was 11.

Uganda ranks as the 13th most-vulnerable country in the world to climate change and 160th out of 192 nations in readiness to confront the threat, according to Notre Dame Global Adaptation Initiative.

More than 900 people have died of hunger this year in the northeast, mostly due to a prolonged drought. Last month, floods in the east killed at least 30 people and left 400,000 without clean drinking water.

Morris says activists are also facing a hostile environment in Egypt, with the authorities subjecting them to intense checks and scrutiny.

“It is so scary that you can't do anything because you don't know who is following you,” he told Euronews. “We are worried. We don't know who has our information.”

“Many people were afraid to come.”

Morris claims that when arriving at the airport he was asked to provide comprehensive personal details and travel plans to security forces.

Human Rights Watch said on Sunday that Egyptian authorities had carried out unlawful surveillance on climate activists, including installing cameras in taxis.

“As participants are arriving for COP27, it is becoming clear that Egypt’s government has no intention of easing its abusive security measures and allowing for free speech and assembly,” says Adam Coogle, deputy Middle East and North Africa director at the NGO.

Human Rights Watch also found that dozens of people were arrested for calling for protests and demonstrations were heavily restricted in the run-up to the event.

The 'African' COP is a ‘missed opportunity’

Though this is the first COP on the African continent, Morris said African voices are being “shut out”.

“We are nowhere to be seen,” he says. “Many voices were left out.”

COP 27 has been called the “African COP” but just over 20 per cent of grassroots activists have secured accreditation. Only a few have funds to cover travel, accommodation and visa costs, says a coalition of African youth climate leaders.

By pushing African climate activists to the margins, Morris believes COP27 is missing out on valuable contributions that could help tackle the climate emergency.

“But whenever they are excluded it will mean we continue to suffer the impacts of climate change.”

“The solutions are here. But they are not being supported. They are not brought to the table.”