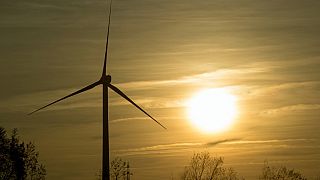 Wind energy is clean and renewable.

Not only is the breeze everywhere and never-ending - albeit variable depnding on location - it also creates power without burning any costly fossil fuels or polluting the air.

For some, it is an environmental elixir. For others, not so much.

Plans for a massive wind farm in **Argentina**’s Somuncura Plateau, a sprawling desert near the Atlantic coast, have sparked concerns.

The proposed site happens to criss-cross the home of 66 Andean condors, a majestic species of bird brought back from the brink of extinction in the region, thanks to a decades-long conservation effort.

Strong, reliable winds mean the area is ideal for the $8.4 billion (€8.5 billion) wind farm - key to greening Argentina’s energy supply - but it is also a vital habitat, giving life to a threatened species, adored for its spiritual resonance.

So far conservation worries have trumped renewable energy needs, with the project being put on hold until a solution is found.

But this is far from an isolated incident.

Wind farm projects the world over have clashed with other environmental objectives and obstacles, creating tricky dilemmas as humanity tries to create a low carbon, environmentally friendly future.

None of this is lost on those who design and build wind turbines.

Adam Butterworth, a renewables designer and developer, points out that there is a decades-long effort to solve the environmental problems posed by creating, installing and operating wind turbines, avoiding zero-sum choices.

He cites one AI-powered technology that can detect incoming birds with cameras and pivot the blades to reduce the risk of deadly collisions, while painting turbines black improves their visibility.

Estimates of how many birds are killed by wind turbines each year vary in the UK from 10,000 to 100,000. This is compared to the 55 million birds that are killed by cats each year in Britain, according to the BBC’s Science Focus.

Other solutions involve simply accommodating nature, rather than tech.

“It's basic logic,” says Butterworth. “If there is a protected species in the area, we shouldn't put a wind farm there."

What is the impact of wind farms on marine life?

Research is still disputed on the impact of offshore wind farms on marine life.

A 2022 European Environment Agency report highlighted that some potential issues are caused by underwater noise during construction, which can displace certain fish species and interfere with their echo location.

Part of this disruption is because turbine foundations have to be fixed to the seabed. 1,000 tonne cranes often lower the foundations onto the seabed, before piling into it with a hydraulic hammer.

Again technology is coming to the rescue, says Butterworth, pointing to the development of floating wind turbines that do not need hammering onto the sea floor.

Besides not intruding on marine life, “an added advantage of this is that turbines can be built in more places as they are currently only fixable in shallow waters," he explains.

How long do wind turbines work for?

Decommissioning wind farms is problematic, too.

The average lifetime of a turbine is 25 to 30 years, after which they need to be taken down and destroyed.

“Then you’ve got a massive problem of getting rid of the materials,” says Butterworth, noting that the blades are particularly troublesome as they are made of unrecyclable fibreglass, carbon fibre and plastics.

Here he says large amounts of money is being spent trying to improve recyclability, particularly new types of plastic that allow turbine parts to be taken apart and reused more easily.

Some say that a simple solution would be to improve the shelf life of turbines, though this itself throws up other issues.

“We could make blades last 40 years, but they'll be a lot heavier which will cost more and reduce the efficiency of the turbines,” said Butterworth. “It’s a balancing act”.

We need to speed up the green energy transition

Wind energy is growing across Europe.

European countries installed 17 GW of new wind capacity in 2021, according to Wind Europe.

It added: “This is not even half of what the EU should be building to deliver on its 2030 Climate and Energy goals”, which aim to cut greenhouse gas emissions by 40% from 1990 levels.

Still, Butterworth is optimistic about the future of wind, especially given its ability to adapt.

“If you ask any informed person, they will tell you that, no, they [wind turbines], aren't the answer. They won't fulfil the world’s energy needs. We need to do much more than that.”

“But they certainly are part of the solution”, he added.