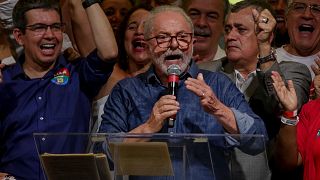 “Let’s fight for zero deforestation,” he said in his victory speech.

“Brazil is ready to resume its leading role in the fight against the climate crisis, protecting all our biomes, especially the Amazon rainforest.”

“Brazil will fight for a living Amazon; a standing tree is worth more than thousands of logs - that is why we will resume the surveillance of the entire Amazon and any illegal activity, and at the same time we will promote sustainable development.”

How have world leaders reacted to Lula’s election win?

In congratulating Lula on his victory, a number of world leaders welcomed his green commitments.

“I look forward to working together on the issues that matter to the UK and Brazil, from growing the global economy to protecting the planet’s natural resources and promoting democratic values,” UK Prime Minister Rishi Sunak wrote on Twitter.

The change in approach to environmental policies could also unlock negotiations on a trade deal between the EU and Mercosur - a South American trade bloc that includes Brazil.

It was officially finalised in 2019 but has been held back by concerns from Europe - particularly French President Emmanual Macron - about the Amazon rainforest.

“Together, we will join forces to take up our many common challenges and rebuild the bond of friendship between our two countries,” Macron tweeted following Lula’s victory.

Norway to resume aid for the protection of the Amazon

On Monday, Norway announced that it would resume subsidies for the protection of the Amazon rainforest.

“We had a good and very close collaboration with the government before Bolsonaro and deforestation in Brazil declined greatly under Lula da Silva's (previous) presidency,” Environment Minister Espen Barthe Edie told AFP.

Norway was one of the biggest donors to funds for the protection of Brazil’s rainforest. But deforestation has risen dramatically to a level Barth Edie describes as “scandalous”. The country halted its aid in 2019 when Bolsonaro took power.

Barth Edie added that around five billion Norwegian krone (€485 million) of unused aid was waiting to be distributed by the Amazon Fund for Forest Conservation and Climate Protection.

Now, the country is keen to make contact with Lula’s team as quickly as possible to “prepare for a resumption of the historically good collaboration between Brazil and Norway.”

Can Lula bring an end to deforestation in the Amazon?

Lula’s victory could cut deforestation in the Amazon by 89 per cent over the next decade, according to an analysis carried out by Carbon Brief. But environmentalists are holding their breath as Lula is left with the massive challenge of reversing Bolsonaro’s damaging policies.

He will need all the support he can get to steer Brazil back towards becoming a global environmental leader.

The re-election of Lula, he adds, means “people and nature have a chance to recover after the wanton destruction of the Bolsonaro years.”

“However, he will need all the support he can get to steer Brazil back towards becoming a global environmental leader.”