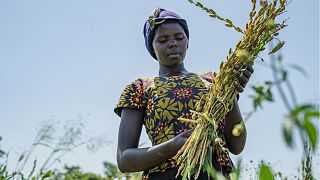 “Four times farmers have planted and four times it has failed.”

With arid and semi-arid lands spanning 89 per cent of the country and contrasting ways of working them, not everyone has the same experience of Kenya’s climate-driven drought. But Sylvia has found that an ecological approach is vital. And it is a perspective she is bringing to COP27 in Egypt next month.

Messages from farmers have often fallen on deaf ears at the UN climate conference. There’s reason to hope this year might be different, however.

For the first time, there’ll be a dedicated Food Systems Pavilion at the venue, run by a coalition of international food organisations.

“We've never really had such a strong COP on food,” says Ed Davey, policy and international engagement director of the Food and Land Use Coalition (FOLU).

“The idea is to take all the excellent initiatives on food that are happening in the world into the world of policymakers who are negotiating in the rooms next door.”

He is hoping it will mean the essential agreements and outcomes of the summit reflect the needs of those who grow our food.

There are so many dimensions to the web of food and climate, nutrition, food loss and waste, Davey adds. And Egypt may be keener than some countries to address the major underlying challenges of the global food system.

The north African nation imported 85 per cent of its wheat from Russia and Ukraine before the war. Water shortages in its formerly fertile lands are also contributing to a terrible food crisis.

“The Egyptians will be facing political stress at home as they host COP,” explains Davey. “Egypt itself illustrates some of the most pressing challenges in the global food system.”

Trying to act on climate at a time when so many people can barely afford to eat is both a challenge and an opportunity to avert the future food crises that climate change will undoubtedly inflame.

Here’s how COP27 can offer relief and reform on food and agriculture.

How bad is the world’s food problem?

Like other big issues on the table at COP - such as biodiversity, energy, gender and water - food has its own set of shocking statistics.

The global food system is responsible for more than one-third of all greenhouse gas emissions (GHGs) and is the primary driver of biodiversity loss. It also leads to the degradation of land and water resources.

On top of that, one-third of all food produced globally is either lost or wasted. In fact, if food waste were a country, it would be the third-largest emitter of GHGs.

If food waste were a country, it would be the third-largest emitter of greenhouse gas emissions.

But “[food] has been the missing piece in climate negotiations for far too long,” says Dr Agnes Kalibata, a Rwandan agricultural scientist and president of the Alliance for a Green Revolution in Africa (AGRA).

Only three per cent of public climate finance goes towards food systems, according to a new report from the Global Alliance for the Future of Food. That’s 22 times less than the amount directed to the energy and transport sectors.

“Finance is a big part of the story for sure,” says Davey.

Within that fraction of funding, only two per cent is allotted to smallholder farmers, despite the fact that they produce around a third of the world’s food.

“If smallholder farmers don't have the funding to shift to more sustainable practices and to adapt to changing climate then they are unlikely to do it and they will really struggle to survive.”

There are two overarching funding streams running through COP: mitigation (money spent to cut emissions) and adaptation (to protect people from the impacts of rising temperatures). A third, loss and damage, is quickly rising up the agenda.

Going into COP27, “the political accent that countries have is more on adaptation than mitigation,” says Davey, “but we risk losing sight of mitigation.”

Getting countries to increase and seriously account for food within their emissions cutting targets (nationally determined contributions) is still the biggest single thing we can push for.

Can COP27 change the way our food is produced for good?

The main formal mechanism for discussing food at COP is the Koronivia joint work on agriculture. Five years ago at COP23 in Fiji, countries made this agreement to bring agriculture into the UNFCCC, but there is still a long way to go to make it an effective tool.

FOLU and partners are calling on parties to at least double the percentage of climate finance allocated to food and land use. The campaigners want a complete re-framing of the way we see food systems.

Beyond a narrow focus on agriculture, they want other topics like diet and agroecology, fertilisers, pesticides, food loss and waste brought into the picture.

“I think the virtue of a systems-based approach,” says Davey, “is that if you just optimise one aspect of the food system for climate, you actually risk doing a lot of damage.”

Planting hundreds of millions of trees, for example, is the solution given by some models. But extensive afforestation could actually have a damaging impact on food security in some parts of the world.

“Whereas if you look at the global system as a whole, and its interconnected parts, then you face a much better chance of achieving better outcomes for people, climate and nature together.”

Is agroecology the answer?

Agroecology involves an ecosystems-based approach, or ‘farming with nature’. That’s how Kuria explains it to the smallholder farmers she trains through her business Sylvia’s Basket. Growing up in Nairobi, holidays spent at her grandparents’ farm sparked her dream of becoming a farmer.

But the organic and regenerative practices that have replenished her soils were not necessarily passed down through the family.

In the past, she says, they were told that the “Green Revolution” - the title given to the introduction of industrial agriculture - was going to feed Africa. So far, it hasn’t delivered.

Our indigenous foods are superior. They are more nutritious and actually able to withstand the drought and the negative effects of climate change.

“We want to say, ‘why are you trying to replicate the wheel all over again, by trying to tell us that a monocrop, one single crop, is actually going to be a marker for food security?’”

“When I got to interact with my kitchen garden is when I realised that there’s more than meets the eye,” says Kuria, who has introduced livestock, hundreds of trees, and an apiary of bees on her land.

Integrating Indigenous and scientific knowledge is a key part of the agroecological approach. It has helped Kuria’s crops to survive when conventionally farmed plots have suffered during drought.

Despite the obvious benefits, agroecology hasn’t secured its place in the Koronivia dialogue yet. COP26 left the term in brackets, with India and the US arguing against its inclusion.

Some countries question whether it's a panacea, or worry it might disrupt the global food system in ways damaging to their interests, explains Davey.

“So it's just become a slightly neuralgic term in some quarters, rightly or wrongly. But I think there is growing global consensus that agroecological approaches are important and necessary.”

Meat is ‘the elephant in the room’ at climate talks

“I think it really is the elephant in the room,” says Davey. “It's unquestionable that many parts of the world, particularly the industrialised West, eat too much meat per capita, particularly red meat.”

On the other hand, “parts of the Global South feel that they have a right to eat more meat, which I think is true. And then in the West, there are powerful interests that bridle at the notion that even we should eat less meat.”

He adds that while it might not necessarily slow progress at COP27, it is an issue that will be discussed at the summit. Though perhaps not at the scale that it should be.

Countries NDCs often skip over the notion that they should address their diets, despite reductions in meat consumption being essential to reaching their net zero goals.

The fact is that food is one of the most inequitable elements of human existence. In 2022, over 870 million people face food insecurity and three billion people lack access to a healthy and nutritious diet, FOLU estimates.

“Climate change is here with us,” says Kuria. “There's nothing much you can do about it. When it doesn't rain, what do you do? How do you save hundreds and millions of people from starvation?