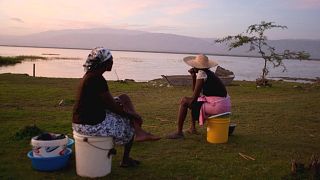 Experts are sounding a new alarm about the effects of climate change for parts of the Caribbean: the depletion of already strained drinking water throughout much of the region   -   Copyright  AP Photo/Dieu Nalio Chery
The opinions expressed in this article are those of the author and do not represent in any way the editorial position of Euronews.
By Racquel Moses  •  Updated: 25/10/2022

Racquel Moses is the only UNFCCC Ambassador for Net Zero from an island and the CEO of the Caribbean Climate-Smart Accelerator. She has been working to unlock finance for projects to build resilience to climate change in the Caribbean and calling for stronger collaboration between vulnerable communities.

We are making progress on climate change - though sometimes it is challenging to see or acknowledge. But to progress further, we need to embrace solutions from the Global South.

As the consequences of climate change became increasingly clear, communities vulnerable to its impacts started to look for ways to compensate for loss and damage and fund much needed adaptation projects. Lawmakers looked to developed countries and major polluters.

And, at the 2009 United Nations Climate Conference (COP15), these major economies pledged $100 billion (€101 billion) in financial aid each year to developing and vulnerable nations.

Ahead of COP26 last year, delegates at the summit were well aware that this target had not been met. The largest amount of financial aid - roughly $83 billion (€84 billion) – was dispensed in 2020.

Loss and damage funding continues to be a thorny issue when it comes to climate policy.

What is loss and damage?

The main difference between the $100 billion per year investment milestone and loss and damage are the mechanisms behind each.

One is essentially voluntary, with preferred targets and various ways of meeting financial obligations, the other seeks funds specifically to account for the physical damage and human cost of climate change.

At its core, an agreement on loss and damage would see countries experiencing climate-related pressures receive further financial support in addition to other forms of support available.

It is the difference between being cast as the saviour vs the party responsible in many instances. Coupled with the fact that the level of support received by territories experiencing these events falls far below what they are able to use to recover creates a vicious cycle of lost resilience.

Wealthy nations have so far baulked at the notion of a loss and damage agreement, worried that it could open the door for litigation and compensation demands. This has led to a political stalemate that has lasted decades.

Paradoxically the longer we take to agree on a framework for loss and damage the more likely legal action becomes the resort of choice.

That is not to say that there has not been any movement on the issue. COP19 in Poland in 2013 saw the creation of the Warsaw International Mechanism for Loss and Damage associated with Climate Change Impacts (WIM), an international body that provides support to countries affected by climate change.

While the support is technical and administrative rather than financial, it has helped drive discussions at subsequent climate summits.

What are the sticking points for loss and damage funding?

Since 2013, there have been slight developments for loss and damage.

The landmark Paris Agreement (2015) cemented loss and damage as one of the key pillars needing to be addressed in climate policy. The Santiago Network on Loss & Damage (SNLD) was created in 2019 to provide further technical assistance, and following 2021’s COP26 parties agreed to hold new discussions on the topic in 2022 and 2024.

At the 77th UN General Assembly in New York in September, Denmark announced it was putting forward €13.4 million to a loss and damage fund with the Scandinavian nation declaring that it was time to ‘get the ball rolling’ on a resolution.

Mia Mottley, Prime Minister of Barbados in her address praised Denmark for becoming the first central government in a developed country to propose a fund devoted to this purpose. They were building on the momentum created at COP26 where Scotland made the initial pledge.

She said that “any attempt to deny that the climate crisis has man-made origins is an attempt to delude ourselves and to admit that we want to be accomplices in the continuing death and loss of damage that ensues to the people who are the victims of it”.

She also asked countries to hold themselves accountable.

“The commitments of loss and damage are absolutely critical if we are to make serious progress in saving our world... the trust that is needed to propel us to fight the great causes of our time will not be won by breaching promises.”

What is the future of loss and damage?

As the Caribbean approaches COP27, a number of solutions are being brought to the table. These measures include using an oil and gas levy to create an ongoing source of funding for loss and damage.

It could also include creating a database of regional talent and a Global South blue carbon exchange that, among other things, could lead to the initial monetization of seagrass as a carbon sequestration tool.

This is a different approach from COP26, where the Caribbean Development Bank launched its Recovery Duration Adjuster, providing a mechanism for assessing access to finance based on vulnerability.

The region is ripe with opportunities and ideas to lead the global climate action transition. We’re just not being heard.

We are actively creating new tools and mechanisms while working to create a bridge between private sector finance and community projects in support of programmes like Ocean Risk and Resilience Action Alliance’s (ORRAA) parametric insurance. This programme involves insuring and investing in coral reefs to reduce risks to coastal communities from the ocean.

We must work towards a resolution on loss and damage. Vulnerable communities must be at the forefront of COP27, and our collective voices should be amplified by the innovation, resilience, and adaptation we have already demonstrated.

Unlocking the conundrum that is loss and damage will provide new pathways for investments into sustainable development for the global community. A just transition begins with a solution for loss and damage.