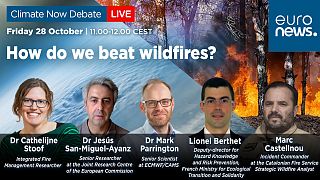 Can we stop Europe from burning every summer? Will wildfires spread further as the planet warms? Is your city, your town, or your village more at risk today than a decade ago?

These questions and more were at the heart of Euronews' latest Climate Now Debate.

The rules of firefighting are changing as the planet warms, and wildfire science is adapting too. Experts are analysing new data sets to help us predict when and where wildfires will break out, and creating smart networks across the continent, so we can learn from each other as we battle the flames.

Our expert panel discussed the initiatives underway right now, looked back at this summer's unprecedented fire season, and forecast the future of fire prevention.

Watch the full debate in the video below:

What caused this summer's wildfires?

According to data gathered by the Copernicus Atmosphere Monitoring Service (CAMS), carbon emissions from wildfires in the EU and the UK this summer, were at their highest in 15 years. These numbers were largely driven by wildfires in southwestern France and the Iberian Peninsula, and in August alone 508,260 hectares of the EU were burnt. In total, from the beginning of the year until 3 September, 750,000 hectares were scorched, compared to an average of around 260,000 hectares in 2006-2021.

It wasn't only Europe that was affected this year though. Wildfires in the Amazon hit a 10-year high too, with Brazil's National Institute for Space Research (INPE) registering 31,513 fire alerts from 1-30 August alone.

While wildfires are a natural, seasonal phenomenon and actually contribute to a healthy ecosystem, an increase in extreme weather conditions, such as prolonged drought and high temperatures is leading to an increase in high-intensity fires.

“What we saw last summer all around Europe is that we are getting to the limit of our capacity for fighting fire," says Marc Castellnou, Incident Commander at the Catalonian Fire Service and Strategic Wildfire Analyst.

"I am a firefighter and I’ve been on the frontline for the past 33 years," he continues, "and all we know is that the fires are just overwhelming us. This means it is not a question of resources, it’s a question of managing our landscape."

“Firefighting is clearly not the solution. We need to act on the variables that we can act on," he explains."If we keep accumulating fuels on the ground, then when fires take place under the weather conditions we are having now because of climate change, these fires will not be stopped by firefighting."

In practice, this means reducing fuel in forests by removing dry wood and scrub, and using controlled fires so that fuel doesn't build up in the landscape.

What is being done to educate the public about wildfires?

In France, Lionel Berthet, Head of the Sub-directorate for Hazard Knowledge and Risk Prevention at the French Ministry of Ecological Transition and Territorial Cohesion is aware of the importance of public education when it comes to tackling wildfires.

“We have to enhance the public awareness, and to do that, for a couple of years we've had a communication campaign which is dedicated to explaining that everyone can create fire, even if he or she doesn’t want to,” he says.

The campaign adverts feature people toasting marshmallows over camp fires, or smoking on agricultural land, alongside a stark warning about the potential consequences.

“First, we tried to make it a bit fun, even if the subject is really serious," he explains. "We tried to show that daily activities, things you don’t think about - such as your cigarette, your marshmallow, your moment of fun, can start a fire. We tried to avoid the idea of people being guilty."

Nine out of 10 fires in France are caused by humans activity, but the majority are not arson. Instead, they are caused by normal life events, such as having a BBQ. To reach as big an audience as possible, the campaign was translated into English and Spanish.

In the Netherlands meanwhile, the situation is very different.

“I’m based in the Netherlands, and everyone knows my country because of floods, so people here and internationally they don’t associate the Netherlands with landscape fires," explains Cathelijne Stoof, a pyrogeographer and Assistant Professor at Wageningen University and Research.

Cathelijne Stoof and her team are trying to change this, but she is worried: "I'm really afraid, that for anything to happen, for us to create fire policy and increase awareness and all those kinds of things, I'm afraid that people will need to get killed. I'm afraid that we need a disaster before anything happens here."

How much did Europe's wildfires contribute to greenhouse gases in the atmosphere?

According to data gathered by the CAMS Global Fire Assimilation System (GFAS), between 1 June and 31 August 2022, wildfires in the EU and the UK released an estimated 6.4 megatonnes of carbon into the atmosphere, the highest level since 2007.

"As fire becomes more of an issue in the urban interface as well as wildland areas, that pollution has more direct impact on local populations too."

While smoke inhilation can be detrimental to the health of firefighters and local populations, as long as fires are relatively short lived, their affect on the atmosphere is actually relatively small when compared to other sources of CO2 emissions.

"For wildfires or fires to actually have a big impact on the atmosphere in terms of climate change, you really need those big fires that burn for eight to 10 weeks," explains Mark Parrington.

The wildfires which are seemingly more dangerous, are those that have been burning in the Arctic Circle and boreal zone in the past few years.

"The fires within the Arctic Circle and within the boreal zone in general are concerning because of the peatlands and the amount of particulate matter that they're putting into the atmosphere," he continues.

"The particulate matter emitted from fires, particularly closer and closer to the Arctic region could potentially reach the higher polar latitudes and also have a climate risk through deposition of black carbon onto sea ice, which could accelerate the melting."

How did Europe tackle the blazes?

In order to keep up with the rapidly evolving situation, the EU has a broad range of national and international systems and networks designed to better understand the emergence of wildfires, fight them more effectively while they are burning, and monitor the effects after the flames have been brought under control.

On a continental scale, there's the Emergency Response Coordination Centre (ERCC), which was formed in 2013 in Brussels and now has 33 participating countries, including all 27 EU member states, plus Norway, Iceland, Montenegro, North Macedonia, Serbia, and Turkey.

Using data gathered by Copernicus, the ERCC monitors unfolding disasters and coordinates its response. They also manage rescEU, a pool of rescources that EU member states have pre-committed to the cause, including 12 firefighting aircraft, and a number of helicopters and medical evacuation planes.

This summer, the ERCC received requests for help from Albania, Czechia, France, Portugal and Slovenia.

The European Forest Fire Information System, EFFIS, also monitors forest fire activity in near-real time. EFFIS supports wildfire management at the national and regional level for EU member states and across the Middle East and North Africa. EFFIS produces the near real-time observation of fire and burnt-areas across Europe, offering time-sensitive information to decision-makers and an extraordinary overview of the fire situation for all European citizens.

"The way to solve this is by preventing and by adapting. By adapting we mean including species that are more resistant, including mixed forests instead of single species forests which are more resilient, and then preventing fire by limiting ignitions."

The rise in wildfires has also brought with it the risk of death for both emergency responders and local populations. In July, a firefighting pilot died in a plane crash while responding to a wildfire in Portugal. Heat-related deaths were also a big issue, with the World Health Organisation (WHO) reporting that there had been 1,700 deaths in Portugal and Spain by 22 July 2022.

What can we do to prevent future fires?

The European Commission is currently running an online public consultation for its proposed new EU-wide framework for forest monitoring. The aim of the legislation is to create an open access information source on the condition and management of EU forests.

This is part of the European Green Deal, which aims to improve the quantity and quality of forests in the bloc. While it may at first seem counterintuitive to plant more trees as the risk of wildfires grow, making existing EU forests more diverse will increase their resilience. By creating mosaic landscapes, with a variety of different ecosystems and habitats, there would be natural firebreaks in the landscape, which may help to reduce the spread of wildfires.

Public education is also key. Property owners can take measures to protect their homes during wildfires too, says Cathelijne Stoof.

"We know that this is coming our way, and how we manage it is that we need to make people aware. We have a lot of good international examples of ways that residents can prepare, so that their homes have a better chance of surviving a fire.

"Very simple things, like not putting firewood against your house, cleaning leaves from your gutters, keeping the fire risk in account when you do your landscaping around the home. Not putting hedges or trees next to your house or over your house."

As climate change continues to drive up global temperatures, we are likely to see more intense wildfires across Europe, but learning to live with them means that we will have to adapt our lives.

A pyrogeographer and Assistant Professor at Wageningen University and Research in the Netherlands, Dr Cathelijne Stoof also sits on the board of the International Assoication of Wildland Fire. She is also a national delegate of The Netherlands to the EU Expert Group of Forest Fires.

Legendary firefighter and expert in the field of climate change and wildfire, Marc Castellnou is Associate Professor at the University of Lleida in Spain. He is also a Wildland Fire Incident Commander for the Spanish government.

Mark Parrington is a senior scientist from the Copernicus Atmosphere Monitoring Service. His work includes monitoring wildfire emissions and emissions from athropogenic and natural sources. He has more than 15 years experience in the field of global atmospheric composition research.

Lionel Berthet, Head of the Sub-directorate for Hazard Knowledge and Risk Prevention, French Ministry of Ecological Transition and Territorial Cohesion

Lionel Berthet works for the French Government in the field of natural risk mitigation. He leads the national team dedicated to natural hazard knowledge, risk prevention and mitigation, including forest fires and wildfires.