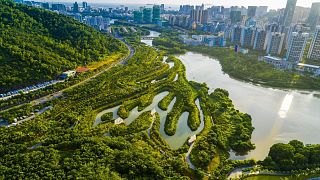 Our relationship with water has been thrown fatally off balance in many parts of the world this year.

More than 600 people have died in Nigeria’s worst floods in decades this month. The floods that claimed 1,719 lives and engulfed a third of Pakistan are now estimated to have left the country with €40 billion in damages. While Europe’s summer of drought is reported to be the worst in 500 years.

As we seek to arrest the emissions that are wreaking havoc with water cycles, urgent action is also needed on adaptation on our blue planet.

In China, one of the world’s fastest growing economies, water is running out. The country’s 1.4 billion population needs the vital resource to thrive but it has become limited and unevenly distributed.

After decades of urbanisation and pollution, China is now faced with both water shortages and flooding - only made worse by the effects of climate change. And pollution is making water quality worse, meaning much of the water available is unusable. Insufficient management of local resources plays a part too.

The point is that this keeps floods at bay. These are being built as new eco-cities and offer a strategy to incorporate the water cycle into town planning.

The Chinese government has chose 16 pilot cities and allocated to each of them between 400 and 600 million yuan (around €55 million) for the implementation of innovative water management strategies. These include Wuhan, Chongqing and Xiamen.