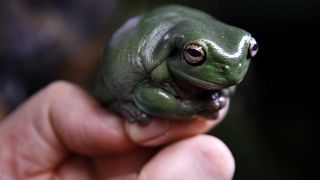 Scientists in Chernobyl have discovered the nuclear disaster has had lasting effects on a local population: tree frogs.

Many of the frogs, which are normally a vibrant green, have turned black. Two scientists decided to investigate why. Here’s what they found.

Chernobyl’s amphibians have been neglected - until now

Chernobyl, in Ukraine, is the site of one of the worst nuclear disasters in history. In 1986, a flawed reactor at Chernobyl’s nuclear plant exploded, releasing deadly radioactive waste into the surrounding area.

They wanted to examine how the wildlife are affected by the radiation almost 40 years later.

What they found focused their efforts.

“When we arrived in Chernobyl, our first night, I was actually walking in a place that was really close to the nuclear facility, just a few hundred meters away,” Orizaola tells Euronews Green. “I was trying to find these frogs that are green. The first ones we found were black. Completely black.”

This was the starting point for the two scientists’ research into the frogs, which is still ongoing. When it’s safe to travel back to Chernobyl, the team plans on returning to study amphibians.

They chose to focus on amphibians because they’re “quite sensitive,” Orizaola says. “They breathe through the skin, they release some of the toxins through the skin… and this group of animals are quite endangered on a global scale.”

The frogs’ colouring can be explained as a protective response to radiation.

“They actually did not "change colour", what changed was the proportion of dark versus normal/green frogs,” Orizaola explains by email. “We suppose that this happened shortly after the accident (first years), when radiation levels were much higher, and radioisotopes more diverse.”

“Melanin is known to reduce the impact of radioactive particles on cells by dissipating the energy of the radiation and avoiding damage,” says Burraco. “This has been described in many organisms in response to ultraviolet radiation, and also in bacteria and fungus facing ionizing radiation.”

“It’s in a way what happens with humans - we have different levels of colouration in the skin,” Orizaola said.

Interestingly, the frogs haven’t shown any other signs of an impact from radiation. According to the scientists, all of the internal organs appear to be completely unaffected by radiation.

How will this evolve for future generations of frogs?

The scientists suspect that the frogs first became darker after the accident, and the pigmentation has passed down through generations of frogs since then.

“It’s now 12, 15 generations of frogs since the accident. So this colouration has been passing through all of those generations,” Orizaola said.

Although it seems evolutionary now, Orizaola can’t say for sure whether this will permanently alter the tree frog population in Chernobyl.

“It could go both ways,” he said. “It could be that they see there is no need for that kind of protection anymore… or it could remain.”

These endangered ‘scrotum’ frogs breathe through their saggy skin