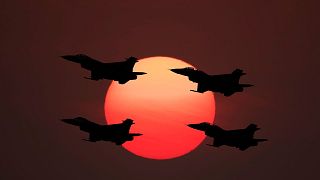 Researchers hope we could cool the earth by launching fleets of planes that spray sun-blocking aerosols into the atmosphere   -   Copyright  Canva
By Charlotte Elton  •  Updated: 14/10/2022

The United States wants to cool the earth by reflecting sunlight back into space.

The plan - which involves pumping sun-blocking particles into the upper atmosphere - is still in the early research phase.

Advocates claim it could reduce the devastating impacts of climate change, and even refreeze the poles. But critics argue that it has unknown health impacts for humans.

So how would the idea work - and will it ever be implemented?

Could blocking out the sun stop climate change?

The White House is coordinating a five-year research plan to assess how “solar interventions” could help fight climate change.

Researchers will look at a number of different ways to block out the sun.

These include ‘marine cloud brightening’ - making clouds brighter so that they reflect solar rays - and cirrus cloud thinning, a technique that eliminates clouds that absorb warming infrared radiation.

But the most controversial technique is stratospheric aerosol injection. In this process, planes would spray an aerosol like sulfur dioxide into the stratosphere.

This mist of particles would reflect the sun back upwards, shading the earth.

The method has already worked - albeit accidentally. When Mount Pinatubo in the Philippines erupted in 1991, it released thousands of tons of sulphur dioxide. The global temperature temporarily dropped by 0.5°C.

In September, researchers at Yale university argued that the injection method could hypothetically refreeze the poles.

In a report published in Environmental Research Communications, they outlined a hypothetical plan to “turn the global thermostat”, according to lead author Wake Smith.

If their plan was implemented, 125 high-flying jets would periodically spray the particles into the atmosphere at latitudes of 60 degrees north and south - roughly around Northern Alaska and the southern tip of Patagonia.

The particles would slowly drift towards the poles, cooling the earth below by 2 degrees Celsius.

The authors suggest that there is “potential global benefit” in their plan, which would cost around $11 billion (€11.3 billion).

“There is widespread and sensible trepidation about deploying aerosols to cool the planet,” Smith says.

“But if the risk/benefit equation were to pay off anywhere, it would be at the poles.”

The plan poses other potential problems.

It would require 175,000 particle-spraying flights per year, which would release millions of tonnes of greenhouse gases into the air.

To address climate change, the world must rapidly reduce its reliance on fossil fuels, Smith warns.

“Game changing though this could be in a rapidly warming world, stratospheric aerosol injections merely treat a symptom of climate change but not the underlying disease,” he says.

“It’s aspirin, not penicillin. It’s not a substitute for decarbonization.”