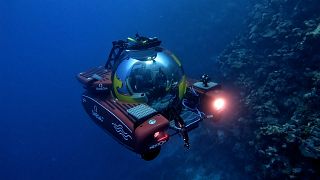 Scientists collecting data on the Nekton mission in an submersible vehicle   -   Copyright  AP Photo
By Hannah Brown  with AP  •  Updated: 13/10/2022

Scientists on a mission to map the Maldivian atolls believe they have discovered a new ecosystem 500 metres deep in the Indian Ocean.

The ecosystem, now called 'The Trapping Zone', supports an oasis of life deep in the ocean. It’s hoped the discovery will lead to better protections for the sea life and fisheries in this unique area. The Trapping Zone theory emerged after scientists on the Nekton Mission collected various biological samples, video evidence and extensive sonar mapping.

It all indicated that megafauna predators such as sharks and other large fish feed on swarms of small sea creatures called micro-nekton when they are trapped against the sea terraces at certain times of day.

Nekton are small aquatic organisms that can swim independently of the current. Both nekton and micronekton feed on zooplankton. The former is usually greater than 10cm in size and the latter ranges in size from 2cm - 10cm.

They typically migrate from the deep sea to the surface at night and dive back into the deep at dawn. The phenomenon is otherwise known as ‘The Vertical Migration’, the largest nightly migration on Earth.

The trapped animals are being targeted at the 500 metre mark by big pelagic predators - including schools of tuna and sharks. Large deep-water fish including the spiky oreo, named after the biscuit, and the alfonsino, a deepwater red bream, are also getting a bite of the moving feast.

"We're particularly intrigued at this depth - why is this occurring? Is this something that's specific at 500 metres and does this life go even deeper?,” says the mission’s lead scientist, Professor Lucy Woodall.

Protecting rare species in the Maldives

Tourism and fishing lie at the heart of the Maldivian economy. The country is also on the frontline of the climate crisis, as global warming leads to increasing storm surges

Data gathered on the Nekton Mission about the state of the country’s coral reef - which offers a natural sea defence - will be eagerly sought by policymakers attending the COP27 climate summit next month.

What is the Nekton Maldives mission?

These natural structures have been extensively investigated and sampled by Maldivian scientists and their international colleagues aboard the 34-day Nekton mission.

The expedition, which was a joint partnership between the Government of Maldives and the Maldives Marine Research Institute was sponsored by Omega who provided a state-of-the-art Omega Seamaster II submersible vehicle.

"I will say it's a huge success. We have gathered a lot of information that we otherwise wouldn't be able to achieve in a short period of time,” says Mohamed Shimal of the Maldives Marine Research Institute.

“We have done a successful job at documenting the deep sea environments and from [1000 metres] deep to about 500 metres."

Watch the video above to learn more about ‘the Trapping Zone’.