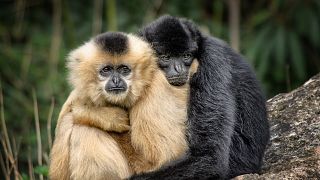 Tonkin Black Crested Gibbons. A new report has found that animal species have declined up to 94 per cent in just 50 years.   -   Copyright  Canva
By Charlotte Elton  with Reuters  •  Updated: 13/10/2022

The world's wildlife populations have plunged by more than two thirds in just 50 years, according to a leading scientific assessment.

Researchers used Zoological Society of London data on the status of 32,000 wildlife populations. It accounts for more than 5,000 species and found that population sizes had declined by 69 per cent on average since 1970.

Deforestation, human exploitation, pollution, and climate change were the biggest drivers of the loss.

The rapid decline shows “that nature is unravelling and the natural world is emptying," said Andrew Terry, director of conservation and policy at the Zoological Society of London (ZSL).

Which parts of the world are worst hit by species decline?

Wildlife populations in Latin America and the Caribbean were hit especially hard, experiencing a 94 per cent drop in just fifty years.

Africa had the second largest fall at 66 per cent, followed by Asia and the Pacific with 55 per cent.

North American animal populations declined by an average of 20 per cent, while Europe and Central Asia experienced an 18 per cent fall.

Some species have experienced precipitous declines in short periods of time.

For example, one population of pink river dolphins in the Brazilian Amazon plummeted by 65 per cent between 1994 and 2016, the report says.

"The war is definitely being lost."

The reports’ findings were broadly similar to those in WWF's last assessment in 2020, with wildlife population sizes continuing to decline at a rate of about 2.5 per cent per year.

What are the solutions to protect nature?

In December, delegates from around the world will gather in Montreal to hash out a new global strategy to protect the world's plants and animals.

One of the biggest asks is likely to be more funding for global conservation efforts.

"We are calling on the rich nations to provide financial support to us to protect our nature," said Alice Ruhweza, WWF's regional director for Africa.

We also need to urgently pivot towards more sustainable production and consumption - halting deforestation for cattle-grazing, for example.

"Our food system is broken. The way we produce and consume food is both the biggest driver of nature loss and a significant contributor to climate change,” said David Edwards, Director of Food Strategy at WWK-UK.

“From jaguars in the Amazon to kingfishers here in the UK, food production and its emissions are destroying species and their habitats.”