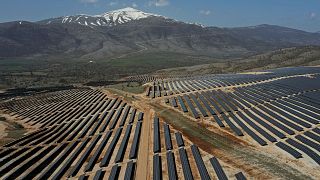 Solar panels soak up the sun's rays at a new photovoltaic park near Kozani, Greece, pictured in August this year.   -   Copyright  REUTERS/Alexandros Avramidis TPX
By Euronews Green  with Reuters  •  Updated: 11/10/2022

For at least five hours on Friday, renewables accounted for 100 per cent of Greece’s power generation, reaching a record high of 3,106 megawatt hours.

Solar, wind and hydro represented 46 per cent of the nation’s power mix in the eight months to August this year, up from 42 per cent in the same period in 2021, according to Greece-based environmental think-tank The Green Tank.

Green Tank called it, a "record of optimism for the country's transition to clean energy, weaning off fossil fuels and ensuring our energy sufficiency.”

"European countries like Greece are rapidly accelerating away from fossil fuels and towards cheap renewable electricity. The milestone reached by Greece proves that a renewables-dominated electricity grid is within sight,” Elisabeth Cremona, an analyst at energy think tank Ember, told Euronews Green.

“This also clearly demonstrates that the electricity system can be powered by renewables without compromising reliability. But there remains more to do to ensure that renewables overtake fossil fuels in Greece's power sector across the whole year."

It’s a significant milestone in the history of the country's electricity system, and follows the bright news that renewables fully met the rise in global electricity demand in the first half of 2022.

But Greece’s transition to clean energy hasn’t been entirely straightforward.

Like other European countries, Greece has cut its reliance on Russian gas following the war in Ukraine by increasing liquefied natural gas (LNG) imports to meet its needs. It has also boosted coal mining, pushing back its decarbonisation plan.

Using IPTO data, The Green Tank finds that renewables - excluding large hydro sources - surpassed all other energy sources, leaving fossil gas in second place as it decreased slightly for the first time since 2018.

Greece aims to more than double its green energy capacity to account for at least 70 per cent of its energy mix by 2030. To help hit that target, the government is seeking to attract around €30 billion in European funds and private investments to upgrade its electricity grid.

It plans to have 25 gigawatt of installed renewable energy capacity from about 10 gigawatt now but analysts say Athens might reach that target sooner.

IPTO has been investing in expanding the country's power grid to boost power capacity and facilitate the penetration of solar, wind and hydro energy.