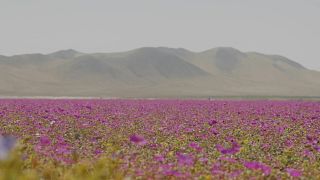 Even though Chile’s Atacama Desert is the sunniest and driest place on earth, rare flowers have recently bloomed.

It has prompted the Chilean government to name this region as its 44th national park in order to protect this natural phenomenon.

On 2 October, Chilean President Gabriel Boric announced that the area would be made into a national park to protect the flowering desert.

The exact area on which the national park will be governed has not yet been determined, but it was decided that it will be between the south of the city of Copiapó and north of the town of Vallenar.

Why is the blooming of flowers in the Atacama desert so special?

The blooming of flowers in the Atacama Desert is quite rare. More than 200 species of plants flower here every three to five years - depending on the climatic conditions.

“At the same time, this allows for the arrival of new insects and fauna to come in search of food. This makes it imperative to protect this park," explains the Minister of National Assets, Javiera Toro.

In previous years, flower species such as white lilies, nightshade flowers, and purple lilies were seen blooming during the event.

According to experts, climate change is contributing to the increasingly frequent occurrence of the "flowery desert," as Chileans call it.

The Atacama Desert is a plateau in South America, covering a 1,000-kilometre strip of land on the Pacific coast, west of the Andes mountains.

Most of the desert is composed of stony terrain, salt lakes (salares), sand, and felsic lava that flows towards the Andes.

According to estimates, the Atacama Desert proper occupies 105,000 square kilometres, making its isolation a prime location for sustainability initiatives.

For many scientists, this blooming of flowers is an exciting occurrence, as it proves the resilience of certain types of flora and fauna in the world's most arid region.

Chile is looking to the future to strengthen its sustainability initiatives and promote research and development for this fascinating region of the world.