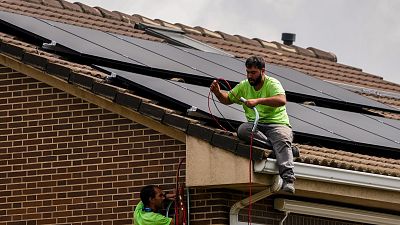 Renewables met all of the rise in global demand for electricity during the first half of 2022, a report from Ember shows.

The London-based energy think tank found that an increase in solar, wind and hydroelectric power prevented a possible 4 per cent rise in fossil fuel generation and a resulting 230 million tonnes of CO2 emissions. That is the equivalent of taking more than 49 million petrol-powered cars off the road for a year.

Ember used data from 75 countries that make up around 90 per cent of the world’s electricity demand and compared the first six months of 2022 to 2021. The report found that we used 389 terawatt hours more electricity than the previous year - a rise in demand of 3 per cent.

Wind and solar met 77 per cent of this increased demand, with hydroelectric power more than meeting the remainder.

The rise in these forms of energy stopped our need for more fossil fuel generation.

“Wind and solar are proving themselves during the energy crisis,” says Malgorzata Wiatros-Motyka, senior electricity analyst at Ember.

We have a solution: wind and solar are homegrown and cheap, and are already cutting both bills and emissions fast.

She adds that the first step to ending the grip of polluting fossil fuels is to build enough clean power to meet the world’s “growing appetite” for electricity. We can’t be sure that we’ve reached peak coal and gas use and emissions are still growing when they need to rapidly decrease.

But, Wiatros-Motyka says, “We have a solution: wind and solar are homegrown and cheap, and are already cutting both bills and emissions fast.”

Did Europe’s droughts affect the way electricity was generated?

In Europe, wind and solar followed global trends but the energy crisis and prolonged droughts this summer did cause a brief uptick in coal use.

As rivers ran dry and lakes shrank in size, hydroelectric and nuclear generation dropped significantly in the first half of the year. Nuclear power generation fell by 12 per cent, mostly due to outages at French plants and closures in Germany.

With this year’s droughts in mind, Ember says that hydroelectric is likely to remain a clean source of power for Europe, but is unlikely to expand any further. Last year it generated 12 per cent of the EU’s electricity.

The think tank also adds that solar is a good companion for hydroelectric in dryer years. Floating solar panels placed on dams can reduce evaporation and generate more electricity on sunny days to make up for the shortfall.

Though wind and solar met around half of the shortfall seen in Europe during the first half of the year, the report found that coal filled the rest of the gap as countries reignited plants to keep the lights on.

The use of coal is still declining, however. In the first half of 2022, the fossil fuel provided 16 per cent of Europe’s energy mix - a significant reduction from 2015 when it made up a quarter of the EU’s electricity production.