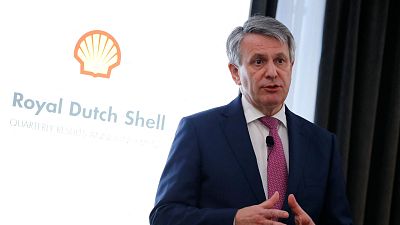 Shell’s chief executive has called on governments to tax energy companies to ‘protect the poorest’ in society.

Ben van Beurden - the outgoing boss of one of the world’s largest gas companies - has urged governments to impose a windfall tax on corporations.

The appeal comes as energy costs continue to soar.

The astronomical prices have generated record-breaking profits for energy companies like Shell, but have put financial pressure on millions of people.

“You cannot have a market that behaves in such a way... that is going to damage a significant part of society,” van Beurden told the Energy Intelligence Forum in London on Tuesday.

"One way or another there needs to be government intervention that somehow results in protecting the poorest.

"That probably may then mean that governments need to tax people in this room to pay for it."

A Shell spokesperson later clarified that van Beurden - who makes $8.2m (€8.2 million) per year and will step down in 2023 - was referring to companies and not individuals.

The support for a windfall tax is a shift from the company’s previous stance. In May, Shell opposed an ‘energy profits levy’ in the UK on the basis that it created investment ‘uncertainty’.

Why are energy prices so high?

The main factor behind the energy price increase is the war on Ukraine.

Europe gets 40 per cent of its gas from Russia. But since invading Ukraine in February, Moscow has curbed supplies - and EU leaders have imposed a partial embargo on imports of Russian gas.

The limited stocks make gas more expensive. Prior to the conflict, gas prices were already increasing, as countries recovering from the pandemic started using more energy.

Does Europe have a windfall tax on energy giants?

Earlier this month, the European Commission's vice-president, Frans Timmermans, estimated that fossil fuel companies could be told to give back around a third of their surplus profits - meaning the profits they have made as a direct result of soaring prices.

In May, the UK announced a windfall tax on oil and gas producers. However, this ‘energy profits levy’ will not be extended beyond 2025.

"The government has been clear that it wants to see the oil and gas sector reinvest its profits to support the economy, jobs, and the UK's energy security," said a UK Government spokesperson.